Riksbank Hikes 100 bp but the Krona gets No Love

by
Marc Chandler
My articles My siteAbout meMy booksMy videos
Follow on:TwitterLinkedIN
Seeking Alpha
Summary:
Overview: Yesterday’s late rally in US shares carried into the Asia Pacific session where all of the large markets advanced. However, the bears are not abdicating and Europe’s Stoxx 600 is off for the sixth consecutive session and US futures are trading lower. The sell-off in the bond market continues. European benchmark yields are mostly 8-10 bp higher and the US 10-year Treasury yield is up nearly five basis points to approach 3.54%. The two-year continues to knock on 4%. The US dollar is firmer against all the major currencies. Despite Sweden’s 100 bp rate, the krona is among the weakest of the G10 currencies, losing ground against all but the Norwegian krone and New Zealand dollar. The central bank of South Korea has requested hourly reports from the foreign 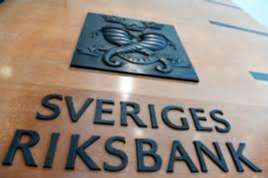 Overview: Yesterday’s late rally in US shares carried into the Asia Pacific session where all of the large markets advanced. However, the bears are not abdicating and Europe’s Stoxx 600 is off for the sixth consecutive session and US futures are trading lower. The sell-off in the bond market continues. European benchmark yields are mostly 8-10 bp higher and the US 10-year Treasury yield is up nearly five basis points to approach 3.54%. The two-year continues to knock on 4%. The US dollar is firmer against all the major currencies. Despite Sweden’s 100 bp rate, the krona is among the weakest of the G10 currencies, losing ground against all but the Norwegian krone and New Zealand dollar. The central bank of South Korea has requested hourly reports from the foreign exchange traders. This seems to have deflected some selling pressure away from the won, while most other emerging market currencies are lower. Gold stalled near $1680 and near $1666 in Europe. December WTI is firm near $85. US natgas is trying to snap a three-day tumble, while Europe’s benchmark is doing the same but with greater conviction. It is up about 4.25% after falling more than 20% over the past three sessions. Iron ore fell for the fifth consecutive session and has fallen nearly 7% over this run. December copper is about 0.5% softer today after slipping marginally yesterday. December wheat has stabilized. It fell 3.4% yesterday.

Japan reported slightly higher than expected August inflation. The headline CPI rose to 3.0% from 2.6%, while the core rate, which excludes fresh food, increased to 2.8% from 2.4%. Both were 0.1% above the median forecast in Bloomberg's survey. Excluding fresh food and energy, Japan's inflation rose to 1.6% from 1.2%, also 0.1% above the median forecast. The Bank of Japan meets later this week. Today's data is unlikely to sway the BOJ to change its monetary policy. However, its challenge will intensify. It had forecast core inflation at 2.3% this year. This will have to be revised higher. Yet, the key to policy might not be this year's core but the next year and 2024. The BOJ projects a 1.4% core rate next year and 1.3% in 2024. The median forecast in Bloomberg's survey puts it at 1.6% and 0.5%, respectively.

As widely expected, China left its loan prime rate unchanged at 3.65% and 4.30% for the one-year and five-year, respectively. The President of the World Bank said that China's unwillingness more stimulus puts more pressure on the US. Malpass noted that in the past, China offered more counter-cyclical support, but acknowledged that while this may be good for the PRC, and in the long-term, it puts pressure on the US. While this sounds intuitive clear, it is anything but. The more the "pressure" is looked at the more elusive it becomes. The US is aggressively tightening monetary and fiscal policy. How do decisions in Beijing impact the thrust of US policy?  It does not. US policy, of course is set independently. If Malpass is referring to world growth, which the World Bank estimates at 0.5% next year (-0.4% on a per capita basis), then it is simply mathematical. The weaker growth in China means the US may account for a greater share of world growth. Ironically, the World Bank forecast that the US grows 2.5% this year and 2.4% next is wildly out of date. The IMF is at 2.3% and 1.0%, respectively. The Federal Reserve's median forecast will be revised later this week. In June, it was at 1.7% this year and next.

The dollar is trading at the upper end of the three-day range against the Japanese yen of roughly JPY142.65-JPY143.80. Session highs are being recorded in the European morning and the intraday momentum indicators are stretched. Yet the market may feel emboldened by the divergence of monetary policy that is on full display this week. A move above JPY143.80 would target the JPY145 area that has capped it on at least a couple attempts this month. The minutes from the Reserve Bank of Australia's meeting early this month underscored the message that rates are getting to levels that may encourage a slower pace of increase. It has boosted its cash target rate by 50 bp in each of the last four meetings. It meets again on October 4. The futures market is nearly evenly split between a quarter point and half-point move. The Aussie extended its two-day advance to almost $0.6750 and has been turned back. It found support a little below $0.6700. A break of $0.6690 could signal a retest on the base near $0.6670, but suspect a consolidative North American session is likely. The Chinese yuan consolidated its recent losses. The US dollar trading in a narrow range within yesterday's range, which was within the pre-weekend range (CNY6.9870-CNY7.0255). The PBOC set the dollar's reference rate at CNY6.9468. The medina in Bloomberg's survey was CNY6.9984.

The idea that the BOJ could simply raise rates and that would stop the yen from falling seems naive. Ask Sweden. The Riksbank delivered a 100 bp hike today to 1.75%. Most economists had expected a 75 bp move, while the swaps markets saw the risk of a larger move. The Riksbank sees the deposit rate at 2.5% a year from now. The krona initially rose but is weaker now against the dollar and euro. Swedish inflation reached 9% last month. The Riksbank cut next year's growth forecast to -0.7% from previously expecting growth to be of that magnitude.

The eurozone reported a nearly 20 bln euro current account deficit in July. It swamped the 15.6 bln euro surplus reported in the first half. Consider that in the first seven months of 2021, the EMU reported an average monthly current account surplus of about 30.6 bln euros. While goods trade balance has eroded, the service surplus has grown. The primary income account, which includes profits, dividends, coupon payments, royalties, licensing fees, and the like has swung into deficit, but also its deficit on its secondary income account (transfer payments) widened. We suggest that the deterioration of the eurozone's external balance is important, it is worth considering the secondary effects, such as beneficiaries of its export of surplus savings.

The euro rose to a five-day high near $1.0050 but was quickly sold back off to $1.0000 in early European turnover. There are large options struck there that expire tomorrow and Thursday (2.3 bln euros and 3.9 bln, respectively). Given that the euro has been straddling that level for several weeks, it is difficult to know or have a sense of what has been hedged or neutralized. Broad consolidation still seems to be the most likely near-term scenario. Sterling extended yesterday's recovery to $1.1460 today, stopping short of the pre-weekend high closer to $1.1480. So far, today is shaping up to be the third consecutive session that sterling has not traded above $1.15. Note that strike activity is set to resume with dock workers in Liverpool for two weeks, and next week Felixstowe dock workers also strike. More rail strikes are planned too.

The US reports some housing data before the conclusion of the FOMC meeting tomorrow. On tap today are August housing starts. They are getting a bad rap. Since the end of last year, US housing starts have alternated between gains and declines on a monthly basis. July was down, so August should be higher. The median in Bloomberg does in fact look for a small increase. In the first seven months of the year, they have averaged 1.65 mln (seasonally adjusted annual rate). During the first seven months of 2021, when rates were lower and the economy more vibrant, housing starts averaged 1.58 mln. In the Jan-July period in 2019, housing starts averaged 1.2 mln a month.

Canada report August CPI today. The broad pattern is expected to echo what we saw in the US. While the headline pace is slowly moderating the core rates ae proving sticky, that speaks to the breadth of the price pressures. Headline CPI is expected to have slowed for the second month, after peaking at 8.1% in June. The 7.3% projected by the median forecast in the Bloomberg survey would be the lowest since April. The Bank of Canada has three core measures (common, median, and trim). They are likely to have firmed to an average of 5.4% from 5.3%. The average was 3.4% at the end of last year. It stood at almost 3.8% in Q1 and 5.2% at the end of Q2. After lifting rates by 100 bp in July and 75 bp earlier this month, the Bank of Canada is expected to hike by 50 bp next month and 25 bp at the last meeting of the year. That would put the target rate at 4%. The swaps market has the terminal about 4.25%.

The potential bearish shooting star candlestick in the dollar-CAD exchange rate seen yesterday has gone for nought. Initial follow-through USD selling was quickly exhausted near CAD1.3225 and the reversal of US equities helped lift the greenback toward CAD1.33. Yesterday's new two-year high was set by CAD1.3345, meeting the 38.2% retracement of the US dollar's decline from the March 2020 pandemic peak (~CAD1.4670). That said, the intraday momentum indicator is stretched, but watch stocks for the cue. The US dollar posted its lowest settlement against the Mexican peso in five sessions yesterday, but here too follow-through has been minimal. The US dollar is bouncing off the MXN19.90 area. In the broader picture, the greenback has been in mostly confined to a MXN19.80-MXN20.20 range since mid-August.

He has been covering the global capital markets in one fashion or another for more than 30 years, working at economic consulting firms and global investment banks. After 14 years as the global head of currency strategy for Brown Brothers Harriman, Chandler joined Bannockburn Global Forex, as a managing partner and chief markets strategist as of October 1, 2018.
My articlesMy siteAbout meMy books
Follow on:TwitterLinkedINSeeking Alpha
Previous Right-Wing Hypocrisy on DeSantis’s Clownish Thuggery
Next Zahl der Cryptocoin-SCAMS auf YouTube explodiert