by
Jeffrey P. Snider
My articles My booksMy videos
Follow on:Twitter
Summary:
Completing the monthly cycle, the ISM released its estimates for non-manufacturing in the US during the month of June 2021. The headline index dropped nearly four points, more than expected. From 64.0 in May, at 60.1 while still quite high it’s the implication of being the lowest in four months which got so much attention. Consistent with IHS Markit’s estimates as well as the ISM’s Manufacturing PMI released last week, there are growing (confirmed) concerns that early on in Q2 2021 that might have been the best we’re going to see. This possibility was raised that much more by the nasty little surprise contained within both sets of the ISM PMI’s, manufacturing and non-manufacturing alike. U.S. ISM Non-Manufacturing PMI, Employment, Jan 2017 - May 2021 - Click

So soon after a huge economic contraction, there should only be unambiguous data all uniformly on the side of clear strength and momentum.

The expectation in the media, certainly, had months ago turned to inflation – as if 2018 never happened – all predicated on one mistake after another. This was based, had to be based on the idea that the government hadn’t just done what was necessary, it had risked doing too much if not way beyond too much (according to the hyperinflationists).

To reach this view, however, proponents had to dismiss and ignore, at least severely downplay, what really happened in 2020. An economy (globally!) that truly had been damaged to such a serious extent is not so easily covered or papered over by a bunch of haphazard spending programs (forget the global QE puppet shows); the two aren’t even close substitutes let alone near perfect ones.

Putting the cart (inflation) before the horses (economy and eurodollar, especially collateral among the latter), any idea of long-term economy damage was very deliberately cast aside in pursuit of the technocratic inflation dream – there’s no problem enough big government checks can’t solve!

Instead, it’s becoming quite clear as 2021 goes on this just hasn’t been true. There have been temporary – dare I write “transitory” – effects from all that fiscal intervention (again, forget the global QE puppet shows which accomplished nothing), but then what?

More and more we are starting to see the contours of “then what” emerge and it isn’t even like past reflations let alone some unmistakably huge inflationary liftoff and recovery. This is how the bond market could quite literally skip two of the biggest inflation reports (in the US) in decades.

Those consumer price elements (deviations) belong to temporary factors which are already receding, exactly as had been expected by those not captured by QE-hysteria coupled to fiscal hatred each combined driving this second inflation hysteria from emotion (either for it, cheering government action, seeing inflation as confirmation that it worked; or, ironically, those diametrically opposed who “need” inflation especially out-of-control inflation to “prove” their criticisms).

It has been emotion (for a second time) rather than rational analysis which has been driving this panic. The economics (small “e”) has never really been there; just more transitory molehills to be made into inflationary mountains.

And that’s why the inflation case has never been anything better than an outlier. Mainstream financial sources have only made it seem otherwise, that there is some consensus; which has been largely true if only in terms of biased commentary. Where it actually matters, where trillions of dollars are on the line, it’s never really been anything else.

Hardly unexpected, it’s all proceeding as if predetermined (Euro$). 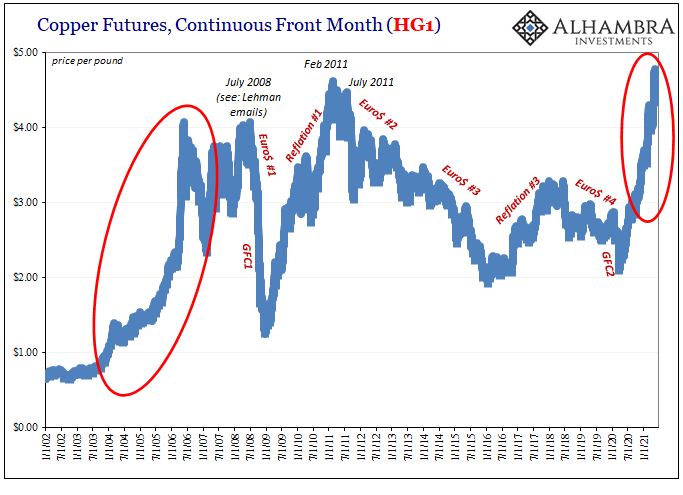 Looking Past Gigantic Base Effects To China’s (Really) Struggling Economy

The Chinese were first to go down because they had been first to shut down, therefore one year further on they’ll be the first to skew all their economic results when being compared to it. These obvious base effects will, without further scrutiny, make analysis slightly more difficult.

Fear of the ultra-inflationary aspects of fiscal overdrive. This is the current message, but according to what basis? Bigger is better, therefore if the last one didn’t work then the much larger next one absolutely will. So long as you forget there was a last one and when that prior version had been announced it was also given the same benefit of the doubt.

What Might Be In *Another* Market-based Yield Curve Twist?

With the UST yield curve currently undergoing its own market-based twist, it’s worth investigating a couple potential reasons for it. On the one hand, the long end, clear cut reflation: markets are not, as is commonly told right now, pricing 1979 Great Inflation #2, rather how the next few years may not be as bad (deflationary) as once thought a few months ago.