by
Jeffrey P. Snider
My articles My books
Follow on:Twitter
Summary:
The monetary mouse. After years of Mario Draghi claiming everything under the sun available with the help of QE and the like, Christine Lagarde came in to the job talking a much different approach. Suddenly, chastened, Europe’s central bank needed assistance. So much for “do whatever it takes.” They did it – and it didn’t take. Lagarde’s outreach was simply an act of admitting reality. Having forecast an undercurrent of worldwide inflationary breakout (how “globally synchronized growth” does seem like ancient history), the two years leading up to 2020 weren’t supposed to have been this way. Draghi ended 2018 by ending his QE ignoring how growth had turned around, only to turnaround himself in 2019, like Jay Powell did on US policy rates, to restart it all over

Gary Galles writes Talk of “Unity” Is Both Hypocritical and Delusional

Lest anyone think this one problem child the lone exception to an otherwise really booming Europe before last year, Italy was merely the worst of the bunch all in the same rotten basket.

That’s why, long before COVID-19, Christine Lagarde was begging for a fiscal coordination. QE hadn’t made a dent in what had become a decade-long economic deficit, and then 2018 (Euro$ #4) turned 2017’s small upturn into yet another downturn despite Draghi’s ongoing “stimulus.” NIRP and all sorts of bond purchases, none of it relevant to the actual European economy. Keep that in mind right now and going forward.

The global economy doesn’t care about the ECB (nor any central bank).

We knew the data was going to be bad but it keeps surprising to the downside. This all matters because a weakened system before getting knocked out doesn’t just get right back up; it’s difficult enough for a healthy body to pick itself up off the mat after being KO’ed. Lagarde’s stimulus panic back in November a reality check for not just Europe and long before the world ever got this sick.

In other words, even the “V” everyone hopes shows up over the coming months probably doesn’t qualify under reasonable standards and definitions. Forget the more likely “L” for a minute, just getting back to 2018 it might take a miracle and another decade! Unfortunately, miracles aren’t exactly shovel-ready.

Sorry, Christine. Monetary policy doesn’t come with a money-back guarantee. It doesn’t have any money in it.

Lagarde Channels Past Self As To Japan Going Global

As France’s Finance Minister, Christine Lagarde objected strenuously to Ben Bernanke’s second act. Hinted at in August 2010, QE2 was finally unleashed in November to global condemnation. Where “trade wars” fill media pages today, “currency wars” did back then. The Americans were undertaking beggar-thy-neighbor policies to unfairly weaken the dollar.

European Data: Much More In Store For Number Four

It’s just Germany. It’s just industry. The excuses pile up as long as the downturn. Over across the Atlantic the situation has only now become truly serious. The European part of this globally synchronized downturn is already two years long and just recently is it becoming too much for the catcalls to ignore. Central bankers are trying their best to, obviously, but the numbers just aren’t stacking up their way.

Germany, Maybe Europe: No Signs Of The Bottom

For anyone thinking the global economy is turning around, it’s not the kind of thing you want to hear. Germany has been Ground Zero for this globally synchronized downturn. That’s where it began, meaning first showed up, all the way back at the start of 2018. Ever since, the German economy has been pulling Europe down into the economic abyss along with it, being ahead of the curve in signaling what was to come for the whole rest of the global economy.

Eurostat confirmed earlier today that Europe has so far avoided recession. At least, it hasn’t experienced what Economists call a cyclical peak. During the third quarter of 2019, Real GDP expanded by a thoroughly unimpressive +0.235% (Q/Q). This was a slight acceleration from a revised +0.185% the quarter before. 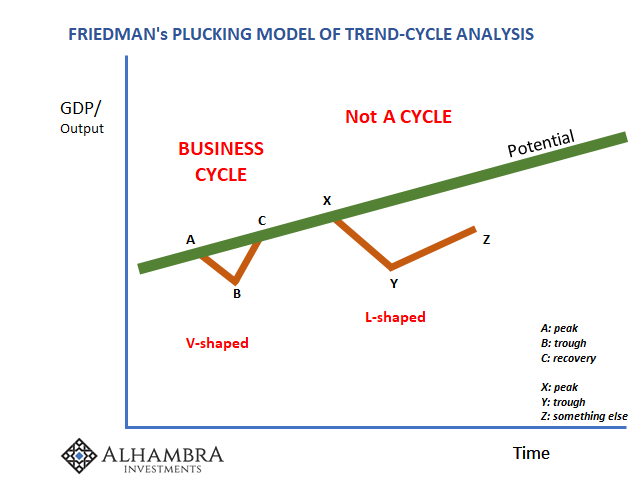 It wasn’t actually Keynes who coined the term “pump priming”, though he became famous largely for advocating for it. Instead, it was Herbert Hoover, of all people, who began using it to describe (or try to) his Reconstruction Finance Corporation. Hardly the do-nothing Roosevelt accused Hoover of being, as President, FDR’s predecessor was the most aggressive in American history to that point, economically speaking.

Jeffrey P. Snider is the head of Global Investment Research of Alhambra Investment Partners (AIP). Jeffrey was 12 years at Atlantic Capital Management where he anticipated the financial crisis with critical research. His company is a global investment adviser, hence potential Swiss clients should not hesitate to contact AIP
My articlesMy books
Follow on:Twitter
Previous Dollar Mixed as Markets Await Fresh Drivers
Next Coronavirus: the dangers of singing