Everyone Knows The Gov’t Wants A ‘Controlled’ Weimar

by
Jeffrey P. Snider
My articles My booksMy videos
Follow on:Twitter
Summary:
There are two parts behind the inflation mongering. The first, noted yesterday, is the Fed’s balance sheet, particularly its supposedly monetary remainder called bank reserves. The central bank is busy doing something, a whole bunch of something, therefore how can it possibly turn out to be anything other than inflationary? The answer: the Federal Reserve is not a central bank, not really. What it “prints” are, as Emil Kalinowski likes to call them, the equivalent of laundromat tokens (I wonder if they’re even that useful). Even Jay Powell knows this, but he’s absolutely thrilled that so many people believe otherwise. When grasped by the dark specter of deflation, what better way (according to an Economist) to get out of it than to make people think you’re

The only topic of conversation in New York during the past week has been ‘inflation.’ It is evident that the tide of inflationary sentiment is running at full flood.

Both The Economist article and one published in BusinessWeek four days later referred to “controlled inflation”, with the former quite negative on the theory, charging, “the country has exchanged a President with little effective power for a ‘currency dictator.’”

This inflation is different. It contains controls that can be used to prevent a runaway…

Disagreement over the wisdom behind the amendment was fierce, but the foreseeable result, inflation, was widely viewed as a foregone conclusion.

As noted yesterday, on the contrary, there was none to be found anywhere – not until the mid-sixties under very different underlying (not deflationary) circumstances.

It wasn’t up to authorities to create it, no matter how much they wanted to or how willing they were to just tear up tradition and exceed political limits. The monetary power for inflation, or deflation, as the case would be, rested within the banking system which, contrary to “recovery” expectations, wasn’t recovering.

This undercurrent would persist for decades. Though the New Deal raised the budget deficit to extreme proportions, World War II would take them even further. And still no inflation.

Fearing it anyway, because central bankers through history have continuously proved how little they understand their jobs, the Federal Reserve by the time of America’s entry into WWII, wounded and weakened by its disastrous performance throughout the decade before, was made subservient to the Treasury Department. Its primary task had been whittled down to little more than bond market policeman; beginning in 1942, enforcing a ceiling on UST yields by promising to buy bonds at predetermined prices.

And yet, even that much was never required. Low interest rates persisted; the Fed, as I recalled a few years ago, never much more than a bystander and spectator as the banking system feared liquidity and deflation regardless of the government’s condition, intent, or disposition. You can’t credibly promise to be irresponsible when everyone, including Treasury, knows you’re toothless.

If you understand why interest rates had only gone lower in the thirties you can easily understand why they didn’t just surge one day in the forties or even fifties. Yes, the Fed kept a ceiling on long rates from ’42 to ’51, but in all that time the central bank rarely had to intervene in the market; none at all over the final years. There was no artificially constrained bond bear lurking underneath.

What ended this bond “bull” market was the same thing which would end up balancing the federal government’s books. Growth and opportunity, not inflation.

Thus, the question before us today isn’t really about inflation, either, it’s whether the debt being further piled on to defeat deflation (which has zero chance of succeeding at that) simply tightens the deflationary trap that much more.

I’ll get to Japan in the nineties hopefully at some point this week. That’ll finish up the major episodes of this un-killable interest rate fallacy 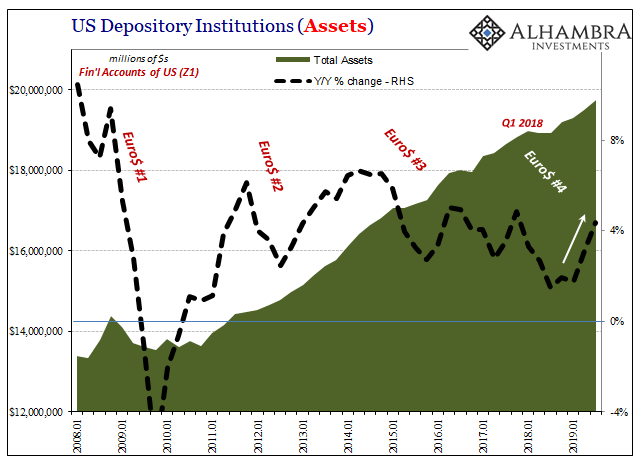 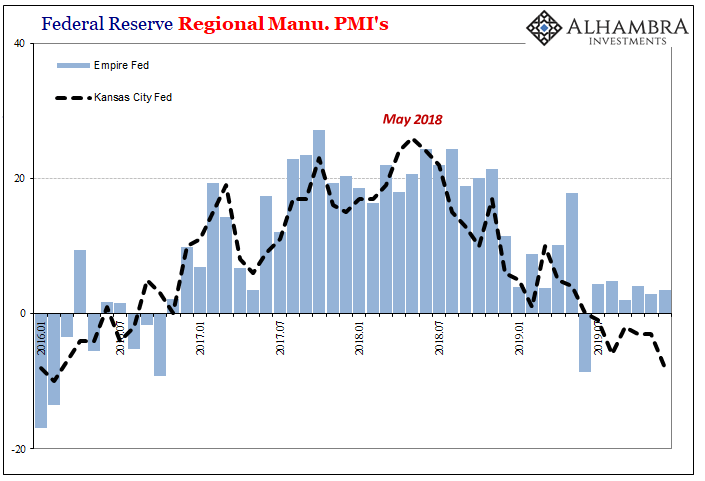 Yesterday, IHS Markit reported that the manufacturing turnaround its data has been suggesting stalled. After its flash manufacturing PMI had fallen below 50 several times during last summer (only to be revised to slightly above 50 every time the complete survey results were tabulated), beginning in September 2019 the index staged a rebound jumping first to 51.1 in that month. 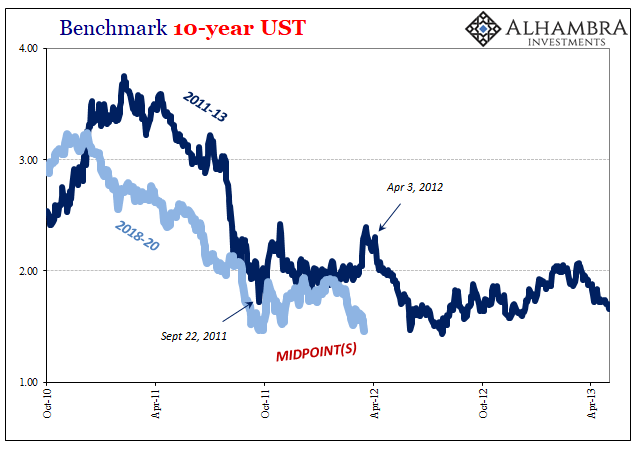 Was It A Midpoint And Did We Already Pass Through It?

We certainly don’t have a crystal ball at the ready, and we can’t predict the future. The best we might hope is to entertain reasonable probabilities for it oftentimes derived from how we see the past. Which is just what statistics and econometrics attempt. Except, wherein they go wrong we don’t have to make their mistakes.

(Almost) Everything Sold Off Today

The eurodollar curve’s latest twist exposes what’s behind the long end. To recap: big down day in stocks which, for the first time in a while, wasn’t accompanied by massive buying in longer maturity UST’s. Instead, these were sold, too. Rumors of parity funds liquidating were all over the place, which is consistent with this curve behavior.

We All Know Who’s On First, But What’s On Second?

It wasn’t entirely unexpected, though when it was announced it was still quite a lot to take in. On September 1, 2005, the Bureau of Economic Analysis (BEA) reported that the nation’s personal savings rate had turned negative during the month of July. The press release announcing the number, in trying to explain the result was reduced instead to a tautology, “The negative personal saving reflects personal outlays that exceed disposable personal income.

Jeffrey P. Snider is the head of Global Investment Research of Alhambra Investment Partners (AIP). Jeffrey was 12 years at Atlantic Capital Management where he anticipated the financial crisis with critical research. His company is a global investment adviser, hence potential Swiss clients should not hesitate to contact AIP
My articlesMy books
Follow on:Twitter
Previous What is the best broker in Switzerland in 2020?
Next Swiss authorities resort to use of spyware for the first time

What is the best broker in Switzerland in 2020?