by
Keith Weiner
My articles My siteMy booksAbout me
Follow on:TwitterFacebook
Summary:
Suppose you wanted to run an enterprise the right way (we know, we know, this is pretty far-out fiction, but bear with us). And, your enterprise has a million dollar piece of equipment that wears out after 10 years. You must set aside 0,000 a year, so that you have million at the end of 10 years when the equipment needs replacing. There’s a word, now archaic, to describe the account in which you set aside this money. From Wikipedia: “A sinking fund is a fund established by an economic entity by setting aside revenue over a period of time to fund a future capital expense, or repayment of a long-term debt.” Whether you borrowed the money to buy the equipment or whether you had equity capital to pay for it, the principle is the same. Unless your business is

Suppose you wanted to run an enterprise the right way (we know, we know, this is pretty far-out fiction, but bear with us). And, your enterprise has a $1 million dollar piece of equipment that wears out after 10 years. You must set aside $100,000 a year, so that you have $1 million at the end of 10 years when the equipment needs replacing. There’s a word, now archaic, to describe the account in which you set aside this money. From Wikipedia:

“A sinking fund is a fund established by an economic entity by setting aside revenue over a period of time to fund a future capital expense, or repayment of a long-term debt.”

Whether you borrowed the money to buy the equipment or whether you had equity capital to pay for it, the principle is the same. Unless your business is sinking, i.e. consuming its capital, you must replace your assets when they wear out. You must set aside a sinking fund.

The money to buy a replacement asset does not come out of thin air when the old asset finally bites the dust. It must be accumulated over the life of the asset.

Note that, even if you financed the asset with a loan, you still need to set aside $100,000 a year (beyond the interest payment). This is to pay off the loan itself.

The Federal Reserve is not just a counterfeiter, it is also the enabler of counterfeiters. Corporations accumulate debt, which means that instead of paying loans when the asset is worn out, they just effectively borrow more. Two ingredients are necessary to enable them to get away with this. And these ingredients are served up by the Fed.

Two is extremely tolerant lenders. Normally, lenders don’t want to lend to companies who can’t repay their loans and just sink deeper and deeper into debt. But the regime of the Federal Reserve disenfranchises the lenders. It subjects them to ever-diminishing returns (i.e. falling interest rates). More fundamentally than that, it removes their choice to lend or not to lend. To hold a dollar balance is to be a lender, and the only choices left are duration and credit risk. And, as the interest rate falls further, everyone is pushed towards greater duration and greater risk. They take these risks, not because their “appetite” is increasing, but because that’s the only way to earn their required minimum rate of return.

Witness the obscenity known as the Payment in Kind bond (PIK).

A PIK bond explicitly repudiates the principle of a sinking fund. The borrower is not only not setting aside cash to repay the principle—it is going deeper into debt with each interest payment due! A PIK tells the lender up front that the debt shall not be amortized. This is not a proper way to run a company, but consider that the primary victim of this abuse is the lender.

The retort is that the lender is willing. Otherwise, he would not buy the bond. That’s true as far as it goes, the way every choice made in government-controlled markets is still a choice. And, no doubt lenders regard this as a convenience. They can have the full principal amount earning interest for them until maturity (and even have the interest earning interest), and then if they wish they can roll into the next PIK.

Lenders should be more concerned with the soundness of the businesses to whom they lend, and less concerned with other factors (e.g. ease of calculating the portfolio model). The principal of the sinking fund, i.e. of paying the full price of each capital asset during its lifetime, is always true regardless of whether the business is a Mom-and-Pop or a major corporation. The principal of sinking deeper and deeper into debt, i.e. of consuming capital, is also the same regardless of the size of the company.

The process of consumption of capital has a finite terminus. When the capital runs out, when the seed corn is all eaten, then there’s nothing left and the fraud can be maintained no longer. The equity holders, of course, lose everything. And, the lenders suffer dreadful losses as well.

Now, let’s tie this with one more connection to irredeemable currency. In addition to disenfranchising savers, irredeemable currency has another property. It removes the extinguisher of debt (i.e., gold). Without such an extinguisher, there is no way to pay off debt, on net. Yes, yes, it is possible for an individual debtor to get himself out of debt. What is not possible is for debtors in aggregate to reduce their debt, much less pay it off.

In other words, debtors are both prevented from paying off their debts and enabled to just add more at the same cost. Meanwhile, savers are forced into the open arms of these debtors. They are deprived of any real choice and, besides, this kind of debt is terribly convenient.

Too many people think of the gold standard primarily in terms of the idea of quantity. It is true that the quantity of irredeemable credit is boundless and the quantity of physical gold is not. However, we present a contrast between these two systems in light of the sinking fund in order to show that the principal difference is not quantity but honesty.

The regime of irredeemable currency is inherently dishonest.

Observant readers may have noticed that we have used the word “sinking” in what seems to be two different ways. The concept of the sinking fund is about paying for the cost of an asset during the life of an asset. The concept of a sinking business is about slowly drowning in debt. They are both about sinking, all right. The difference is whether the debt is being sunk or the debtor.

I am writing in response to the comments you made in a letter to investors yesterday, which were widely reported. You have set the gold community afire, with claims that are not new and not true. So I shall attempt to douse the flames.
As everyone knows, President Roosevelt outlawed the ownership of gold in 1933. Although gold was legalized in 1975, fears linger today that the governments may repeat this heinous act.

The Out Has Not Yet Begun to Fall, Market Report 31 March

So, the stock market has dropped. Every government in the world has responded to the coronavirus with drastic, if not unprecedented, violations of the rights of the people. Not to mention, extremely aggressive monetary policy. And, they are about to unleash massive fiscal stimulus as well (for example, the United States government is about to dole out over $2 trillion worth of loot).

Interview with Robert Hartmann, Co-Owner ProAurum, Over the last couple of months, we’ve witnessed unprecedented changes in the global economy, in the markets and in our societies. The corona crisis and the governmental measures that were introduced had a dramatic and direct effect on all of us, as investors and as citizens. 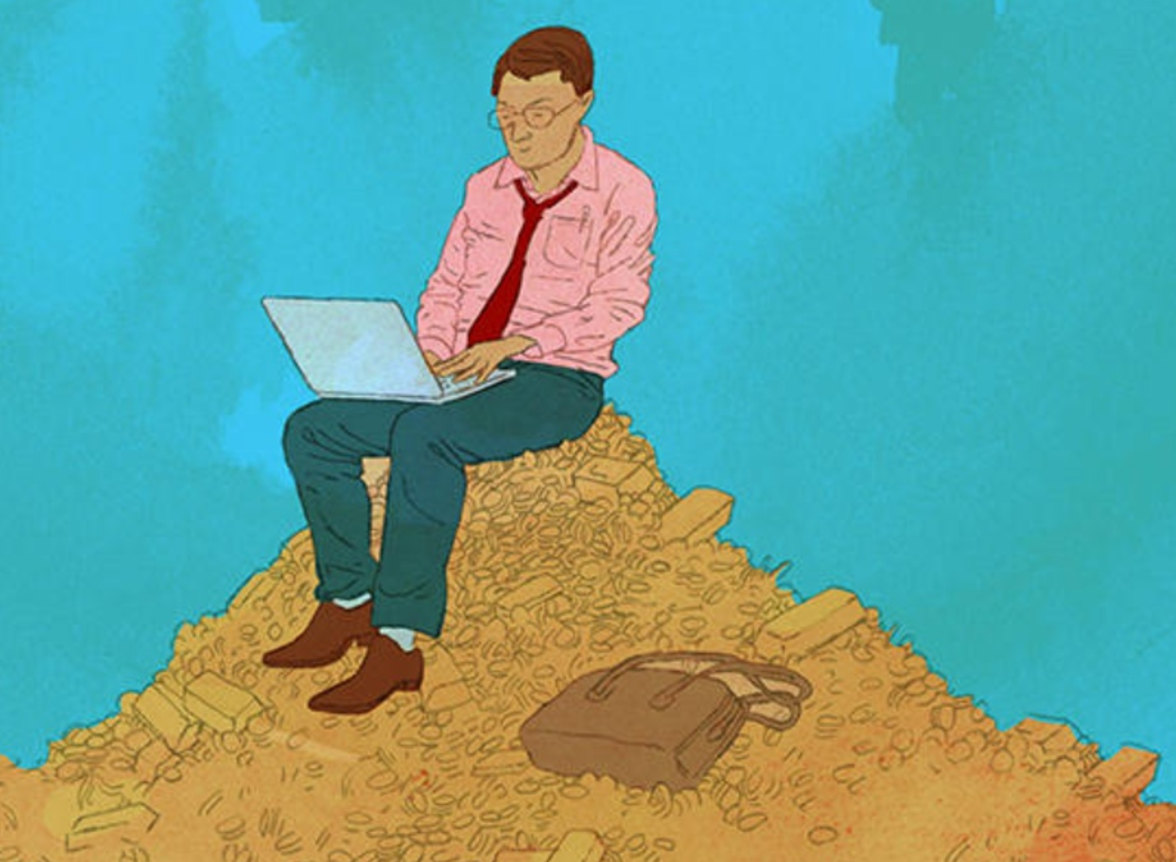 Switzerland is the undisputed top dog of the global gold industry, refining a majority of the world’s gold, as well as being the leading exporter. But how seriously does the country take its responsibility to ensure sustainable mining and the protection of human rights?

Each year some 14,000 tonnes of plastic waste end up in the Swiss environment. A federally commissioned analysis identifies two main culprits: tyre abrasion (around 8,000 tonnes) and littering (around 2,700 tonnes).

The Best 2020 Credit Card Strategy: No Fees and Maximum Returns

Keith Weiner is president of the Gold Standard Institute USA in Phoenix, Arizona, and CEO of the precious metals fund manager Monetary Metals. He created DiamondWare, a technology company that he sold to Nortel Networks in 2008. He writes about money, credit and gold. In March 2015 he moved his column from Forbes to SNBCHF.com
My articlesMy siteMy booksAbout me
Follow on:TwitterFacebook
Previous Narrative Economics: How Stories Go Viral and Drive Major Economic Events
Next Coronavirus: drop in revenue could leave Swiss hospitals with 3 billion loss