by
Jeffrey P. Snider
My articles My booksMy videos
Follow on:Twitter
Summary:
It’s not recession fears, those are in the past. For much if not most (vast majority) of mainstream pundits and newsmedia alike, unlike regular folks this is all news to them (the irony, huh?) Economists and central bankers everywhere had said last year was a boom, a true inflationary inferno raging worldwide. For once, CPIs (or European HICPs) seemed to have confirmed the narrative. Unlike 2018 when inflation indices kept policymakers and their forecasts out in the cold, 2021 sure appeared to be different. Yet, it wasn’t. Apart from specific price behavior (supply shock, neither money printing nor an overheating economy), the underlying not-recovery pattern has repeated. Markets worldwide picked up on these key distinctions which, as usual, were never reported

Again, it’s not rate hikes. The media is only blaming them because they’ve confused consumer price action for economic strength which was just never there. In that sense, what’s different in June 2022 is how more in the mainstream are aware “something” is amiss.

From all around the world, data in every corner, market prices all over the place, it’s globally synchronized Euro$ #5 that’s just now starting to get nasty. At his last press conference, Federal Reserve Chairman Jay Powell made a bunch of unsubstantiated claims, none of which were called out or even questioned by the assembled reporters. These rituals are designed to project authority not conduct inquiry, and this one was perhaps the best representation of that intent. Powell’s job is to put the current predicament in the best possible light, starting by downplaying the current predicament.

The fact that German retail sales crashed so much in April 2022 is significant for a couple reasons. First, it more than suggests something is wrong with Germany, and not just some run-of-the-mill hiccup. Second, because it was this April rather than last April or last summer, you can’t blame COVID this time.

Just the other day, President Biden took to the pages of the Wall Street Journal to reassure Americans the government is doing something about the greatest economic challenge they face. Biden says this is inflation when that’s neither the actual affliction nor our greatest threat.

Another Month Closer To Global Recession

We always have to keep in mind that the major economic accounts perform poorly during inflections. Europe in early 2018, for example, was supposed to have been just booming only to have run right into the brick wall that was Euro$ #4.

China Then Europe Then…

This is the difference, though in the end it only amounts to a matter of timing. When pressed (very modestly) on the slow pace of the ECB’s “inflation” “fighting” (theater) campaign, its President, Christine Lagarde, once again demonstrated her willingness to be patient if not cautious. 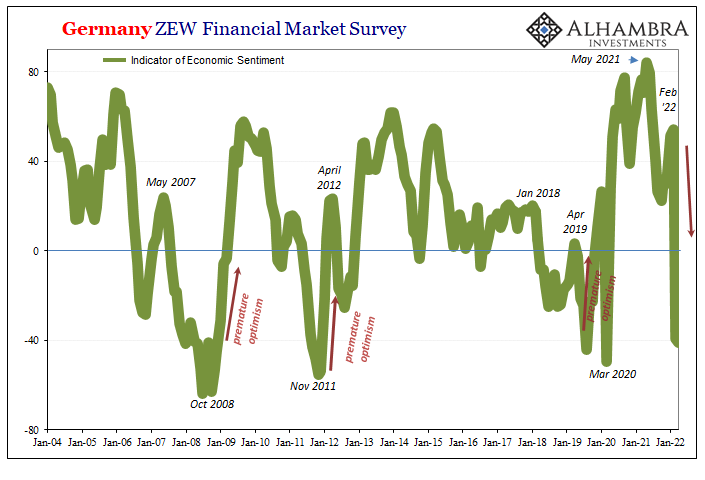 German optimism was predictably, inevitably sent crashing in March and April 2022. According to that country’s ZEW survey, an uptick in general optimism from November 2021 to February 2022 collided with the reality of Russian armored vehicles trying to snake their way down to Kiev. Whereas sentiment had rebounded from an October low of 22.3, blamed on whichever of the coronas, by February the index had moved upward to 54.3.

Goldilocks And The Three Central Banks

This isn’t going to be like the tale of Goldilocks, at least not how it’s usually told. There are three central banks, sure, call them bears if you wish, each pursuing a different set of fuzzy policies. One is clearly hot, the other quite cold, the final almost certainly won’t be “just right.” Rather, this one in the middle simply finds itself…in the middle of the other two.Running red-hot to the point of near-horror, that’s “our” Federal Reserve.

Jeffrey P. Snider is the head of Global Investment Research of Alhambra Investment Partners (AIP). Jeffrey was 12 years at Atlantic Capital Management where he anticipated the financial crisis with critical research. His company is a global investment adviser, hence potential Swiss clients should not hesitate to contact AIP
My articlesMy books
Follow on:Twitter
Previous SWISS plans more flight cancellations into autumn
Next Unit of Account and Current Valuations by Paul Belanger