Employment in Switzerland continued to fall in 3rd quarter

by
Swiss Statistics
My articles My booksMy videos
Follow on:Twitter
Summary:
26.11.2020 – In the 3rd quarter 2020, total employment (number of jobs) fell by 0.4% in comparison with the same quarter a year earlier (+0.5% with previous quarter). In full-time equivalents, employment in the same period declined by 0.1%. The Swiss economy counted 11 900 fewer vacancies than in the corresponding quarter of the previous year (–15.1%) with the employment outlook indicator also indicating a downward trend (-2.3%). These are some of the latest findings from the Federal Statistical Office (FSO). Switzerland Employment Level, Q3 2020 Source: investing.com - Click to enlarge You Might Also Like Swiss Consumer Price Index in July 2020: -0.9 percent YoY, -0.2 percent MoM The consumer 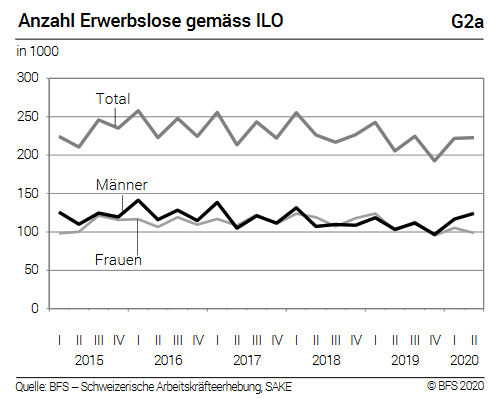 Switzerland’s GDP fell by –8.2 % in the 2nd quarter of 2020, after decreasing by –2.5 % (revised) in the previous quarter.* Domestic economic activity was severely restricted in the wake of the pandemic and the measures are taken to contain it. The global economy also plunged into a sharp recession. However, Switzerland’s GDP decline remained limited in an international comparison. 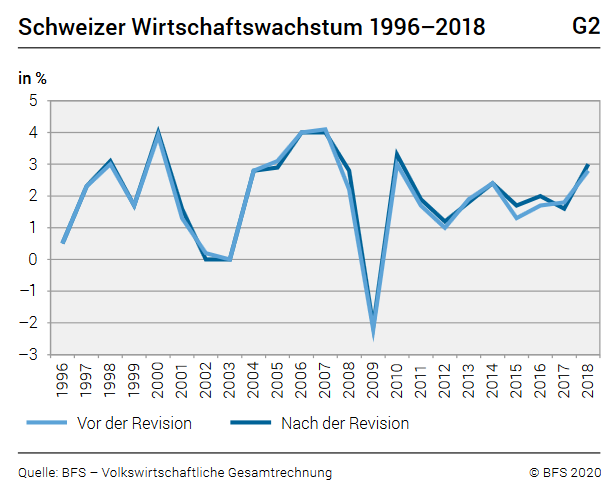 GDP level corrected from 2.8 percent to 3.6 percent between 1995 and 2017 following revision of the national accounts

The results of the national accounts published by the Federal Statistical Office (FSO) have been revised upwards. New data series are available for the period 1995 to 2019. This revision was carried out in collaboration with the sector responsible for quarterly estimates at SECO, provides methodological improvements and takes into consideration new data. 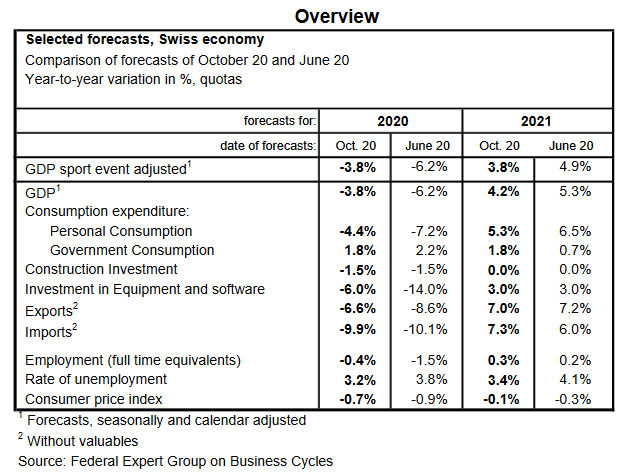 The Expert Group is expecting GDP adjusted for sporting events to fall by 3.8 % in 2020 and unemployment to average 3.2 % over the year as a whole. Prospects for 2020 are therefore less negative than feared in the middle of the year. The momentum is likely to weaken as time goes on.

Economic forecasts by the Federal Government’s Expert Group for autumn 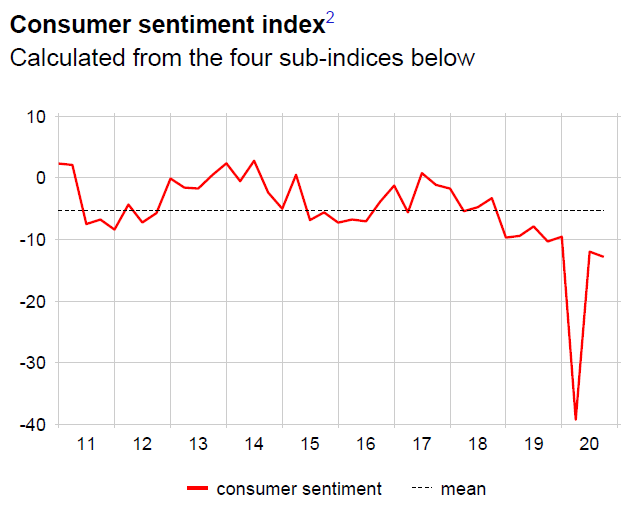 Consumer sentiment in Switzerland has largely been stagnating since the summer. All sub-indices used for the calculation are still below their long-term average and none have improved significantly compared to this summer’s survey. Economic development and the situation on the labour market are seen as unfavourable.

Consumer Confidence: Results of the October 2020

The Swiss Federal Statistics Office publishes information on the situation and developments in Switzerland in a multitude of fields and plays a part in enabling comparisons at an internal level.
My articlesMy books
Follow on:Twitter
Previous Government hopes for ‘first successful pension reforms’ of the century
Next Blockchain trading venue challenges stock exchange dominance