Gratuitously Impatient (For a) Rebound

by
Jeffrey P. Snider
My articles My booksMy videos
Follow on:Twitter
Summary:
Jay Powell’s 2018 case for his economic “boom”, the one which was presumably behind his hawkish aggression, rested largely upon the unemployment rate alone. A curiously thin roster for a period of purported economic acceleration, one of the few sets joining that particular headline statistic in its optimism resides in the lower tiers of all statistics. The sentiment contained within the ISM’s PMI’s were at least in the same area as the unemployment rate, and therefore they were upgraded and then relentlessly highlighted as if comprehensively irrefutable. With the unemployment rate, you could at least see why there was such an error. ISM Purchasing Managers Indexes, 2008-2020 - Click to enlarge The participation problem left the denominator improperly

Services, meanwhile, the ISM Non-manufacturing PMI today was reported to have leapt up as far as 57.1 last month from 45.4 the month before (and no worse than 41.8 in April). While that level would be consistent with only the bottoming out process, it’s not even consistent across PMI’s.

According to IHS Markit, on the other hand, its Services PMI remained firmly below 50 (47.9) even as it was upgraded significantly from its flash reading (46.7) released late last month. This latter number also suggests a bottoming out, but well behind in the process (still shrinking, though now at a substantially lesser rate) from where the ISM apparently sees it (no longer shrinking, instead already moving back upward again at a relatively decent, but so far insufficient, pace).

Therefore, take your pick while being mindful that neither set of numbers are equal to recovery. That’s the part the ISM proponents are leaving out, alongside any notion of this obvious upward bias. Further along in the rebound process isn’t the same thing at all.

In fact, I’d have expected much better by now; given the size of the decline and the fact that the bottom had been reached several months ago, where are the 60s maybe even 70s? Since we are following behind China’s reopening, I’ll end here with what I wrote in March about that:

When the index falls to something like 35.7 or 29.6, what that meant was a near complete drop across the whole range of businesses in both economic segments. If the rebound was as instantaneous as people seem to be interpreting from these figures, then the PMI’s should have been something like 60 or even 70.

All a 52 suggests when it follows a 35 is that it might not have gotten worse…To immediately jump to the conclusion that it must be getting better is being impatient.

Same with 57.1 – and that would have been with corroboration. Without it, as Markit proposes, people are being gratuitously impatient. 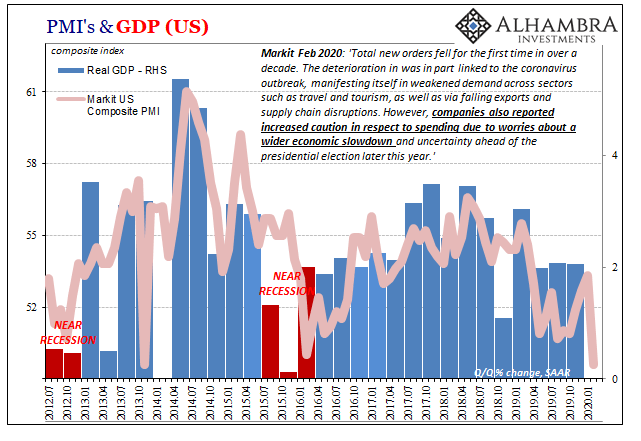 Take Your Pick of PMI’s Today, But It’s Not Really An Either/Or

Take your pick, apparently. On the one hand, IHS Markit confirmed its flash estimate for the US economy during February. Late last month the group had reported a sobering guess for current conditions. According to its surveys of both manufacturers and service sector companies, the system stumbled badly last month, the composite PMI tumbling to 49.6 from 53.3 in January.

China’s PMI’s continue to impress despite the fact they continue to be wholly unimpressive. As with most economic numbers in today’s stock-focused obsessiveness, everything is judged solely by how much it “surprises.” Surprises who? Doesn’t matter; some faceless group of analysts and Economists whose short-term modeling has somehow become the very standard of performance.

The Washington Post began this week by noting how the US economy seems to have lost its purported zip just when it needed that vitality the most. Never missing a chance to take a partisan swipe, of course, still there’s quite a lot of truth behind the charge. An actual economic boom produces cushion, enough of one that President Trump and his administration may have been counting on it when opting for full-blown shutdown.

I guess in some ways it’s a race against the clock. What the optimists are really saying is the equivalent of the old eighties neo-Keynesian notion of filling in the troughs. That’s what government spending and monetary “stimulus” intend to accomplish, to limit the downside in a bid to buy time. Time for what? The economy to heal on its own.

What a difference a month makes. The euphoria clearly fading even as the positive numbers grow bigger still. The era of gigantic pluses is only reaching its prime, which might seem a touch pessimistic given the context. In terms of employment and the labor market, reaction to the Current Employment Situation (CES) report seems to indicate widespread recognition of this situation. And that means how there are actually two labor markets at the moment. 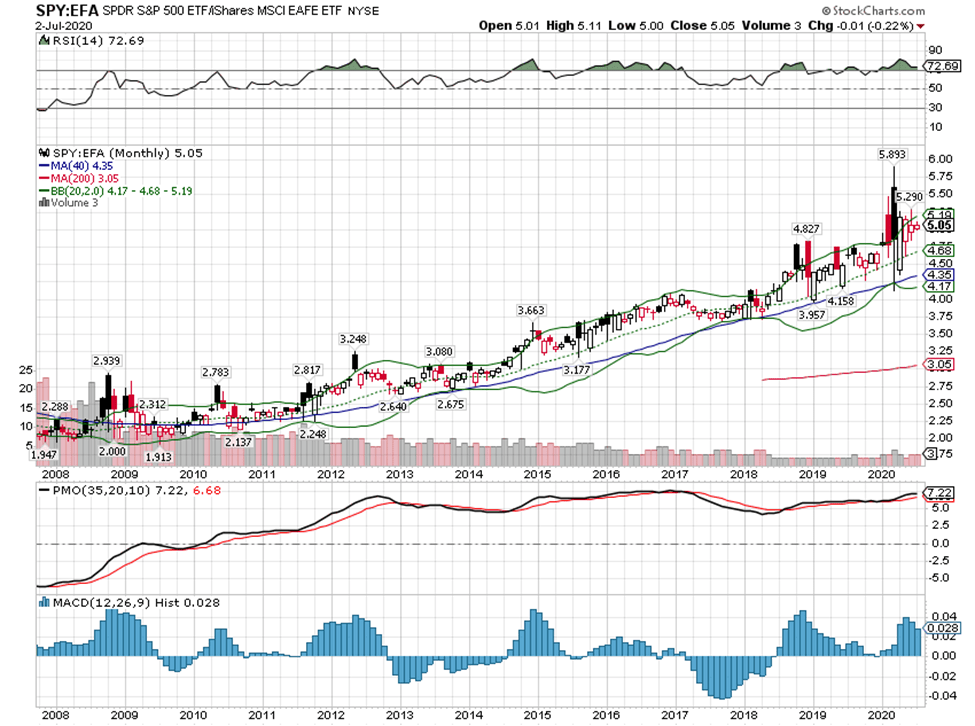 Most Long-Term Trends Have Not Changed. A lot has changed over the last 4 months since the COVID virus started to impact the global economy. Asia was infected first with China at ground zero. Their economy succumbed first with a large part of the country shut down to a degree that can only be accomplished in an authoritarian regime.

Jeffrey P. Snider is the head of Global Investment Research of Alhambra Investment Partners (AIP). Jeffrey was 12 years at Atlantic Capital Management where he anticipated the financial crisis with critical research. His company is a global investment adviser, hence potential Swiss clients should not hesitate to contact AIP
My articlesMy books
Follow on:Twitter
Previous The Theory Of MMT Falls Flat When Faced With Reality (Part II)
Next Monthly Market Monitor – July 2020