by
Jeffrey P. Snider
My articles My booksMy videos
Follow on:Twitter
Summary:
What a difference a month makes. The euphoria clearly fading even as the positive numbers grow bigger still. The era of gigantic pluses is only reaching its prime, which might seem a touch pessimistic given the context. In terms of employment and the labor market, reaction to the Current Employment Situation (CES) report seems to indicate widespread recognition of this situation. And that means how there are actually two labor markets at the moment. Occupying the same geographic space but separated otherwise by every factor that’s meaningful. What’s driving the headline figures is only the first group, those workers who were let go if only because their place of employment was forced to close down for non-economic reasons.As the restrictions relax, this group

It’s Hard To See Anything But Enormous Long-term Cost

The unemployment rate wins again. In a saner era, back when what was called economic growth was actually economic growth, this primary labor ratio did a commendable job accurately indicating the relative conditions in the labor market. You didn’t go looking for corroboration because it was all around; harmony in numbers for a far more peaceful and serene period.

Back in the middle of 2018, this kind of thing was at least straight forward and intuitive. If there was any confusion, it wasn’t related to the mechanics, rather most people just couldn’t handle the possibility this was real. Jay Powell said inflation, rate hikes, and accelerating growth. Absolutely hawkish across-the-board.And yet, all the way back in the middle of June 2018 the eurodollar curve started to say, hold on a minute.

Very Rough Shape, And That’s With The Payroll Data We Have Now

The Bureau of Labor Statistics (BLS) has begun the process of updating its annual benchmarks. Actually, the process began last year and what’s happening now is that the government is releasing its findings to the public. Up first is the Household Survey, the less-watched, more volatile measure which comes at employment from the other direction. As the name implies, the BLS asks households who in them is working whereas the more closely scrutinized Establishment Survey queries establishments as to how many are on their payrolls.

What Did Everyone Think Was Going To Happen?

Honestly, what did everyone think was going to happen? I know, I’ve seen the analyst estimates. They were talking like another six or seven perhaps eight million job losses on top of the twenty-plus already gone. Instead, the payroll report (Establishment Survey) blew everything away, coming in both at two and a half million but also sporting a plus sign.The Household Survey was even better, +3.8mm during May 2020. But, again, why wasn’t this expected?

The Federal Reserve has been trying to propagate two big lies about the economy. Actually, it’s three but the third is really a combination of the first two. To start with, monetary authorities have been claiming that growing liquidity problems were the result of either “too many” Treasuries (haven’t heard that one in a while) or the combination of otherwise benign technical factors. 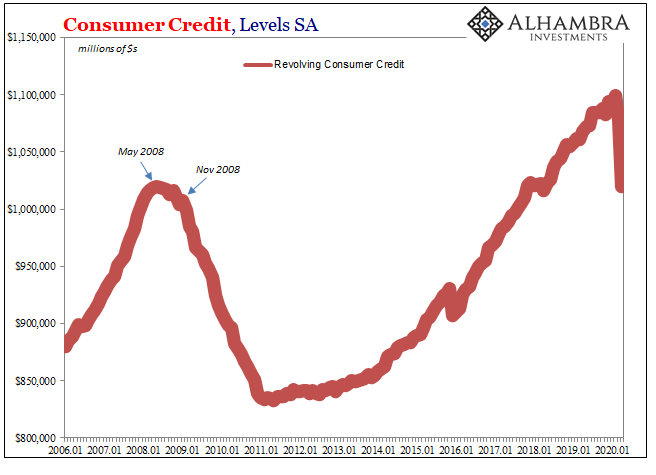 A Second Against Consumer Credit And Interest ‘Stimulus’

Credit card use entails a degree of risk appreciated at the most basic level. Americans had certainly become more comfortable with debt in all its forms over the many decades since the Great Depression, but the regular employment of revolving credit was perhaps the apex of this transformation. Does any commercial package on TV today not include one or more credit card offers? It certainly remains a staple of junk mail.

Inflation, But Only At The Morgue

Why is everyone so angry? How can socialism possibly be on such a rise, particularly among younger people around the world? Why are Americans suddenly dying off? According to one study, two-thirds of millennials are convinced they are doing worse when compared to their parents’ generation. Sixty-two percent say they are living paycheck to paycheck, with no savings and no way to get any (though they also tend to “overspend” when compared to other age groups).

It’s Not About Jobless Claims Today, It’s About What Will Hamper Job Growth In A Few Months

You’ve no doubt heard about the jobless claims number. At an incomprehensible 3.28 million Americans filing for unemployment for the first time, this level far exceeded the wildest expectations as the economic costs of the shutdown continue to come in far more like the worst case. And as bad as 3mm is, the real hidden number is likely much higher.

Jeffrey P. Snider is the head of Global Investment Research of Alhambra Investment Partners (AIP). Jeffrey was 12 years at Atlantic Capital Management where he anticipated the financial crisis with critical research. His company is a global investment adviser, hence potential Swiss clients should not hesitate to contact AIP
My articlesMy books
Follow on:Twitter
Previous Gold Will “Trend Toward $10,000 Per Ounce Or Higher” Over The Next Four Years
Next Swiss retail sales up 30 percent in May after COVID-19 measures eased