Home / SNB & CHF / It’s Not Nothing, It’s Everything (including crypto)

It’s Not Nothing, It’s Everything (including crypto)

by
Jeffrey P. Snider
My articles My booksMy videos
Follow on:Twitter
Summary:
Markets got aggressive long before the FOMC did. Everything, and I mean everything, has been trending the other way. Jay Powell says inflation risks are most pressing when markets have consistently priced the opposite for a whole lot longer. It’ll be revised history when ultimately the mainstream attempts to write it over the months ahead, many will try to snatch some limited victory from the jaws of defeat. Should recession happen and bring an end to the “inflation”, just ask Target and Chinese producers, the Fed Cult will claim a few rate hikes were enough to scare off the Phillips Curve (which the cult alone imagines). Even these Volcker-like whispers are an acknowledgement the Fed maybe, kind of could be wrong here. Start with cryptocurrencies, those like

Another economic discussion lost to the eventual coronavirus pandemic mania was the 2019 globally synchronized downturn. Not just downturn, outright recession in key parts from around the world, maybe including the US.

Peak Inflation (not what you think)

For once, I find myself in agreement with a mainstream article published over at Bloomberg. Notable Fed supporters without fail, this one maybe represents a change in tone. Perhaps the cheerleaders are feeling the heat and are seeking Jay Powell’s exit for him? 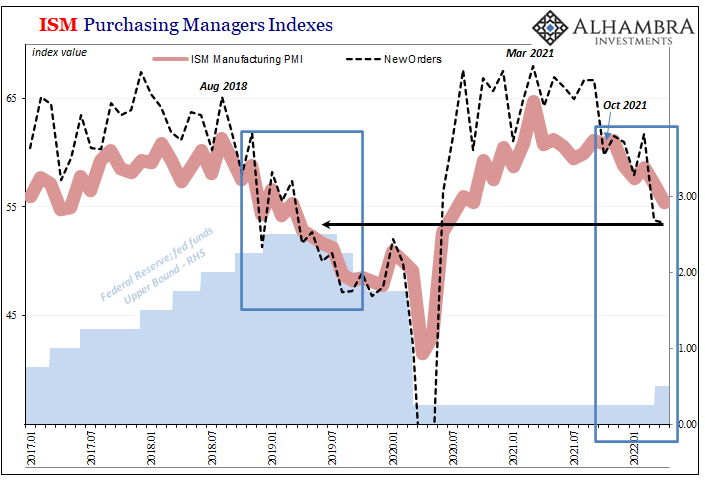 Jeffrey P. Snider is the head of Global Investment Research of Alhambra Investment Partners (AIP). Jeffrey was 12 years at Atlantic Capital Management where he anticipated the financial crisis with critical research. His company is a global investment adviser, hence potential Swiss clients should not hesitate to contact AIP
My articlesMy books
Follow on:Twitter
Previous Slowing Money-Supply Growth in 2022 Points to Recession
Next US tax authority asks Switzerland for client data from 26 institutions