Dollar Firm as US Economy Continues to Outperform

by
Win Thin
My articles My booksAbout me
Follow on:LinkedIN
Seeking Alpha
Summary:
Uncle Sam hat and money. American hat. Hat independence day - Click to enlarge Political uncertainty is likely to persist in the US; the big unknown is whether this will impact the US economy US core PCE reading will be of particular interest and is expected to rise 1.8% y/y; Quarles (voter) and Harker (non-voter) speak Dovish BOE comments are weighing on sterling; France reported weak CPI and consumer spending data Tokyo September CPI was lower than expected; FTSE Russell made some announcements regarding WGBI Rate cuts in EM continue; Brazil reports August central government budget data The dollar is mostly firmer against the majors as another eventful week winds down. Swissie and Loonie are outperforming, while Stockie and sterling are underperforming. EM 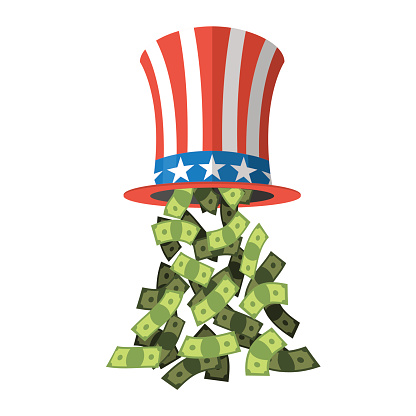 The dollar is mostly firmer against the majors as another eventful week winds down. Swissie and Loonie are outperforming, while Stockie and sterling are underperforming. EM currencies are mixed. PHP and INR are outperforming, while ZAR and RUB are underperforming. MSCI Asia Pacific was down 0.7% on the day, with the Nikkei falling 0.8%. MSCI EM is down 0.4% so far today, with the Shanghai Composite rising 0.1%. Euro Stoxx 600 is up 0.6% near midday, while US futures are pointing to a higher open. 10-year UST yields are up 3 bp at 1.2%, while the 3-month to 10-year spread has steepened 3 bp and stands at -8 bp. Commodity prices are mixed, with Brent oil down 0.4%, copper up 0.6%, and gold down 0.9%.

Political uncertainty is likely to persist in the US. The whistle-blower’s allegations are very serious and will take time to be fully investigated. However, reports are emerging that House Democrats are hoping to conclude the process before the holiday season. Obviously, the situation is very fluid.

The big unknown is whether the current political uncertainty will impact the US economy. For now, we don’t think there will be a significant impact. Our biggest worry remains the trade war but other than that, the US economy is pretty much on auto-pilot. This uncertainty is unlikely to prevent consumers from consuming and that’s what is driving the economic strength right now.

Indeed, the better than expected August trade and inventory data out yesterday should boost estimates for US Q3 growth. Atlanta Fed GDPNow has it at 1.9% SAAR and NY Fed Nowcast has it at 2.2% SAAR. Both will be revised today. Note that Q2 growth was unrevised at 2.0% SAAR, but there was an upward revision to core PCE to 1.9% y/y in Q2. US yields should move higher, which in turn should boost the dollar.

August personal income and spending, durable goods orders, and final University of Michigan sentiment will be reported today. The core PCE reading will be of particular interest and is expected to rise 1.8% y/y vs. 1.6% in July. If so, this would be the highest rate since January and nearing the Fed’s 2% target. With core CPI at cycle highs, markets really have to start accepting that the bar to further Fed rate cuts is high.

In terms of Fed speakers, today brings Quarles (voter) and Harker (non-voter). Recent data suggest the Fed will be in no hurry to cut rates October 30, and yet WIRP suggests 43% odds for a cut. Whilst down from nearly 60% on Tuesday, this still seems way too high. Our constructive view on the US economy and the less dovish Fed that is implied continues to support our strong dollar call that is likely to persist well into 2020.

Dovish BOE comments are weighing on sterling. Well-known hawk Saunders said that “If the UK avoids a no-deal Brexit, monetary policy also could go either way and I think it is quite plausible that the next move in bank rate would be down rather than up.” Cable has retraced half of its September rally and a break below the $1.22 area would set up a test of the September 3 cycle low near $1.1960.

France reported weak September CPI and August consumer spending. Headline inflation fell to 0.9% y/y vs. 1.0% expected, while spending fell -0.4% y/y vs. -0.1% expected. Germany reports September inflation Monday followed by the eurozone Tuesday and we see downside risks for both. Yet it will be some time before the ECB eases again, even though signs support our view that this month’s moves were too timid. The euro is making a new low for this move and is on track to test the May 2017 low near $1.0840.

Tokyo September CPI was lower than expected. Headline and ex-fresh food both fell a tick more than expected to 0.4% y/y and 0.5% y/y, respectively. Inflation is slowing and the economy remains weak ahead of the October 1 consumption tax hike. The BOJ left policy steady last week but is expected to ease in the coming months. USD/JPY continues to creep higher and is on track to test the September 18 high near 108.50. Break above that high sets up a test of the August 1 high near 109.30.

FTSE Russell made some announcements regarding its (formerly Citibank’s) WGBI. Israel will be added to the benchmark index. On the other hand, China failed to gain entry and will remain on the watchlist for inclusion. Malaysia remains on the watchlist for exclusion, meaning policymakers will need to do more to improve market access.

Rate cuts in EM continue. Just yesterday, the Philippines cut 25 bp, Egypt cut 100 bp, and Mexico cut 25 bp. All three are expected to cut further and are simply part of a wider trend of easing in EM. As EM rates fall, investors will find it harder and harder to invest in countries that do not pay sufficient risk premia.

Brazil reports August central government budget data. A primary deficit of -BRL17.5 bln is expected. Consolidate budget data will be reported Monday. We think COPOM is cutting rates too aggressively, with another 50 bp move to 5.0% likely October 30. Recent price action suggests that no one really wants to hold BRL at 5%.

Win Thin is a senior currency strategist with over fifteen years of investment experience. He has a broad international background with a special interest in developing markets. Prior to joining BBH in June 2007, he founded Mandalay Advisors, an independent research firm that provided sovereign emerging market analysis to institutional investors. He received an MA from Georgetown University in 1985 and a B.A. from Brandeis University 1983. Feel free to contact the Zurich office of BBH
My articlesMy booksAbout me
Follow on:LinkedINSeeking Alpha
Previous USD/CHF technical analysis: Bulls trying to defend multi-week old ascending trend-channel
Next BNP Paribas bank accused of complicity in Sudan rights abuses