Investing in a new sustainable economy

by
Perspectives Pictet
My articles My siteMy booksMy videosAbout me
Follow on:TwitterFacebook
Summary:
Published: Wednesday November 01 2017The former UN climate chief who presided over the negotiations that led to the 2015 Paris agreement on global warming is now urging investors, businesses and policymakers to grab ‘the opportunity of the century’ and invest in an economy-wide transition to a low carbon world.Words like ‘2020’, ‘milestones’ and ‘optimism’ which are scribbled on the windows-cum-whiteboard in Christiana Figueres’ reception room give some clues into the thinking of the former UN climate chief, who presided over the COP21 negotiations that led to the historic 2015 Paris agreement on global warming.The Costa Rican diplomat now leads Mission 2020, a global initiative to urge businesses, investors and policymakers to take bold steps that would radically reduce carbon emissions

The former UN climate chief who presided over the negotiations that led to the 2015 Paris agreement on global warming is now urging investors, businesses and policymakers to grab ‘the opportunity of the century’ and invest in an economy-wide transition to a low carbon world.

Words like ‘2020’, ‘milestones’ and ‘optimism’ which are scribbled on the windows-cum-whiteboard in Christiana Figueres’ reception room give some clues into the thinking of the former UN climate chief, who presided over the COP21 negotiations that led to the historic 2015 Paris agreement on global warming.

The Costa Rican diplomat now leads Mission 2020, a global initiative to urge businesses, investors and policymakers to take bold steps that would radically reduce carbon emissions by 2020. Why 2020? She says the next three years will be a make or break time if the world is to create a more prosperous, resilient and sustainable world by 2030 – aim of the UN Sustainable Development Goals.

‘The prospects of achieving some of the SDGs will be largely determined by 2020, or at least the cost of doing so. Obviously we can decarbonise at a much higher cost – financial and social – but what we’re trying to do is to find the path with the least cost and least disruption to the global economy.’

China, India and other emerging economies have launched initiatives to adopt renewable energy, she adds: ‘None of them are doing this for altru­istic purposes, to save the planet. It’s hard-nosed market forces driving them: reducing costs, improving efficiency, and achieving high returns on investments which are much safer.’

Decarbonising the stagnant global economy is the opportunity of the century to jumpstart growth. If we invest seriously in new technology, infrastruc­ture and transport that are climate-resil­ient, the economy will thrive and create millions of jobs.

Statistics agree with her. A report from the International Renewable Energy Agency shows that investments in renew­able power and energy efficiency would make the world economy USD19 trillion richer by 2050 and create 6 million jobs.

As well as advising governments and policymakers, Christiana Figueres also works with asset owners and wealthy families to raise awareness about the opportunity of investment in the transi­tion to a low carbon economy, and acceler­ate the flows of investment in the critical next three years, to avoid a much higher cost of a ‘jump to distress’.

‘The risk of not acting on climate change is very serious while the reward for acting now is high. Asset-owners should ask themselves whether they want to be part of the problem or part of the solution – they can’t be both.’ 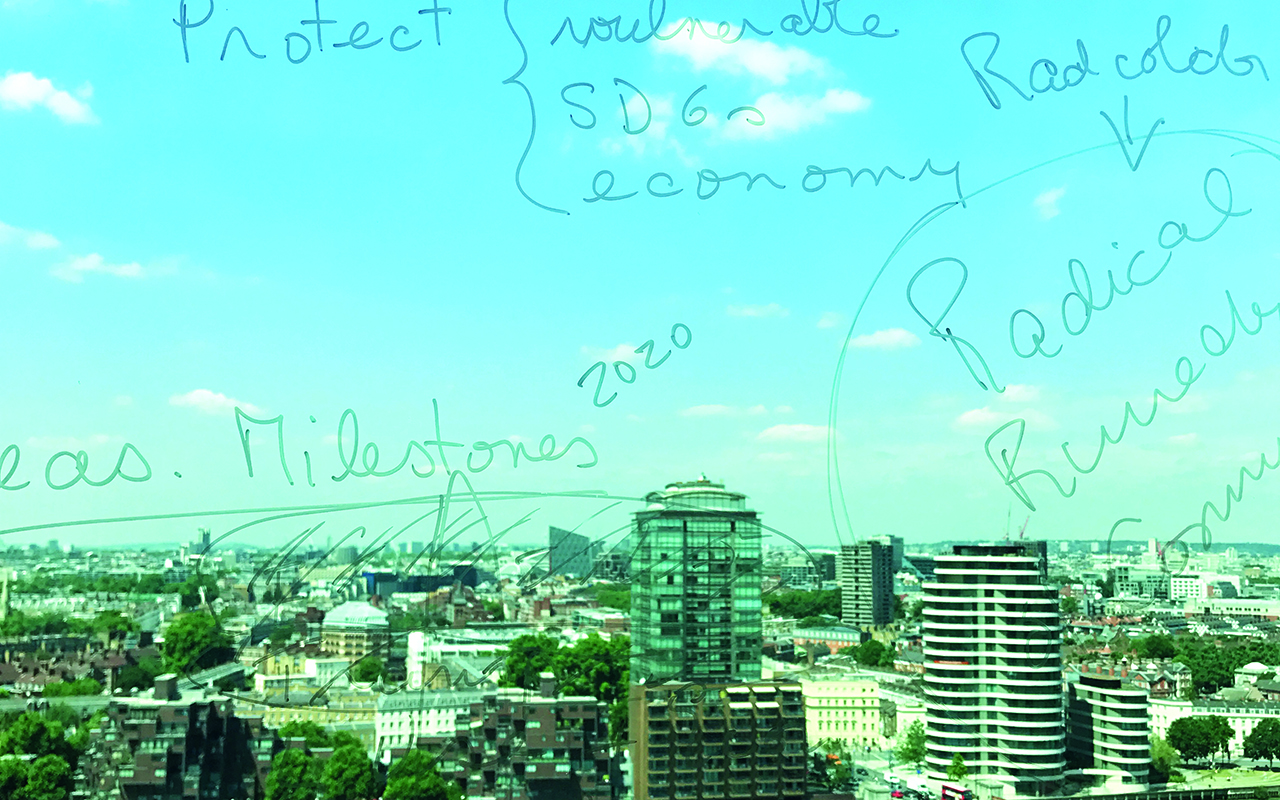 Decarbonisation certainly requires enormous investments. The Organisation for Economic Cooperation and Develop­ment estimates that investments in green infrastructure needs to double to USD2 trillion a year – 2 per cent of global GDP – between 2012 and 2030 to make the tran­sition to a low carbon world.

It doesn’t mean new money. Capital is there. It just needs to shift into something that is greener than it is now.

One way to help plug this finance gap, she says, is to invest in green bonds. Issued by organisations and companies such as the World Bank, City of Johannes­burg and Apple, they raised more than USD80 billion from climate-conscious investors in 2016, double the amount of the year before.

Despite their exponential growth, however, green bonds are still a fraction of the overall fixed income market and their performance is not yet convincing. Christiana Figueres says that investing in a greener and more sustainable future may mean giving up potential returns in the short term.

‘It may actually turn out to be a good investment if it makes a safer world for their future generations and for the continuity of their family businesses and wealth.’

‘The next generation is very inter­ested in impact investment and in moving their portfolios away from being decided exclusively by the bottom line. Now it’s about triple bottom line – profits, envi­ronment impact and social considerations – and creating corporations with purpose. I’ve spoken with many young profes­sionals who want to work with such businesses. We’re facing a big transition in corporate identity.’

She says that investing in a low carbon economy needs to go beyond merely incorporating environmental, social and governance (ESG) aspects in a portfolio.

‘My concern about ESG is that it’s a nice to have: companies like to have one paragraph on page 67 of the annual report on what they are doing on ESG. But that’s not going to cut it,’ she says. ‘It needs to go way beyond this. Carbon exposure and a shift from high to low carbon have to be at page 1.’

She also sees an important role for philanthropy. Even though critics say it lacks the ability of governments to address big problems, she is upbeat about what philanthropy can achieve and the difference it can make – espe­cially when the financial resources of governments are limited.

She cites the success of the Kigali Cooling Efficiency Programme, backed by 18 foundations – including those of Bill & Melinda Gates and the Children’s Investment Fund. They have commit­ted USD52 million to help developing countries switch to energy efficient, climate-friendly, affordable cooling equip­ment such as fridges and air conditioners.

But with just USD650 million, only 2 per cent of global philanthropy dollars, spent in the fight against climate change, she wants to see a tenfold increase.

So what does Christiana Figueres consider as the main obstacle to the poli­cies she advocates?

‘The obstacle is here,’ she says, point­ing to her head. ‘We can change policies, make financial shifts and deploy tech­nology if we decide we want to do so. Impossible is not a fact – it’s an attitude. And we need to change our mental chip. That’s what we are doing, by inviting everyone to realise that there is a huge opportunity here.’

Christiana Figueres is an internationally recognised leader on climate change. She was Executive Secretary of the United Nations Framework Convention on Climate Change (UNFCCC) 2010-2016 and during her tenure led the historic climate change agreement, COP 21, in Paris, 2015. She is the convener of Mission 2020, a global initiative to ensure the world bends the curve of greenhouse gas emissions by 2020, among many other prestigious responsibilities.

Do not hesitate to contact Pictet for an investment proposal. Please contact Zurich Office, the Geneva Office or one of 26 other offices world-wide.
My articlesMy siteMy booksAbout me
Follow on:TwitterFacebook
Previous Euro area: solid growth, but inflation still under par
Next Signs that US rental boom could slow