by
Acemaxx-Analytics
My articles My siteAbout meMy booksMy videos
Follow on:Twitter
Summary:
Paola Subacchi is Professor of International Economics at the University of London’s Queen Mary Global Policy InstituteHow did the belief in the primacy of national interest over multilateral cooperation develop since the end of Bretton Woods despite a deeply interconnected global economy? What are the main reasons for the rising of economic nationalism we have ...

Paola Subacchi is Professor of International Economics at the University of London’s Queen Mary Global Policy Institute
How did the belief in the primacy of national interest over multilateral cooperation develop since the end of Bretton Woods despite a deeply interconnected global economy? What are the main reasons for the rising of economic nationalism we have seen recently on both sides of the Atlantic (e.g. “Brexit” and “America First” approach)?
The resurgence of economic nationalism and the belief that national interests should take precedent over multilateral cooperation can ultimately be traced back to unfettered capital flows, or – as I call it – free money.
Under the Bretton Woods arrangements capital controls ensured that the scope for beggar-thy-neighbour policies was limited, but this came to an end when the United States unilaterally unravelled the system in 1971.
The blind belief in the market’s ability to self-adjust meant that the ‘non-system’ of floating exchange rates and unfettered capital flows became the default.
What followed was a devastating string of financial and economic crises – such as Britain and Italy’s Black Wednesday (1992), Mexico’s Tequila crisis (1994), the Asian financial crisis (1997) and of course the global financial crisis (2008) – that have ravaged both developing and developed countries.
The response to these crises has been lacking to say the least. Instead of addressing the problem at its root, countries all over the world have turned to borrowing to patch over their crises in an attempt to continue on with ‘business as usual’.
Harsh austerity programmes have in turn been implemented to counter debts – think of Greece, for example – but this has created a pull between sustaining the international order on the one hand, and the wants and needs of domestic electorates on the other. This has stirred public discontent and resulted in the nationalistic reactions that we see today in the countries at the heart of the Bretton Woods order, i.e. those of western Europe and the United States.
In your book you note that the international order is now in a state of a political crisis and the possibility of its collapse must be taken seriously. If the US is unwilling to lead the international order, while China is still unable, who will provide development finance and a financial safety net?
Finance for development and a financial safety net are the public goods typically provided by the global leader. In order to provide these goods without excessive risk, the global leader needs to be the issuer of the key reserve currency. Because of the dominance of the dollar, then, only the United States can play this role.
The United States is retreating from the role of leader and there is no viable replacement, so finance for development and financial safety nets will come to be provided on a regional basis.
The new regional institutions led by China and the BRICS, such as the Asian Infrastructure Investment Bank (in which China holds veto rights) and to a lesser extent the New Development Bank, provide development finance for the east while the Chiang Mai Initiative Multilateralization does the same for a financial safety net.
The existing international institutions still reflect the economic order that emerged at Bretton Woods and have not been reformed to adequately cater for China and the other emerging markets economies.
Indeed, the United States holds veto rights in both the IMF and the World Bank, while China and the other developing countries hold far less voting rights than they should do respective of their economic weights.
While some will argue that the new regional institutions indicate China’s intentions to create alternative and even rival institutions, I don’t think that this is the case.
Their size and design indicate that they are intended to exist alongside the long-standing international financial institutions – those that emerged from the Bretton Woods conference.
To what extent do you think the current COVID19 crisis has called into question the sanctity of international cooperation that should be upheld above all?
If two World Wars have taught us anything it’s that the importance of international cooperation must not be overlooked. This is particularly true in times of crises, whether that be an economic crisis or a health crisis.
Yet with Trump claiming that China attempted to cover up the outbreak, insisting that Covid-19 be called the ‘Wuhan virus’, and pulling the plug on World Health Organisation funding – the outlook is certainly looking bleak.
It is dispiriting that the G20, that emerged from the global financial crisis as the ‘premier forum for international economic cooperation’, has failed to gather action around a coordinated response to the pandemic.
Think, for example, of the need to coordinate the mobility of supplies – especially of medical equipments – and people during the outbreak. Without cooperation the risk of beggar-thy-neighbour measures is always present.
Thank you very much.
Paola Subacchi is Professor of International Economics at the University of London’s Queen Mary Global Policy Institute
She is the author of the new book “The Cost of Free Money – How Unfettered Capital Threatens Our Economic Future", published by the Yale University Press in July 2020 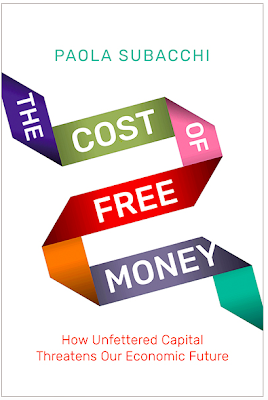