by
Charles Hugh Smith
My articles My siteMy booksAbout me
Follow on:Twitter
Summary:
In the false religion of data, heresy is asking for data that is not being collected because it might reveal unpalatably unprofitable realities. Here’s how every modern con starts: let’s look at the data. Every modern con starts with an earnest appeal to look at the data because the con artist has assembled the data to grease the slides of the con. We have been indoctrinated into a new and false religion, the faith of data. We’ve been relentlessly indoctrinated with the quasi-religious belief that “data doesn’t lie,” when the reality is that data consistently misleads us because that is the intent. Nobody in the False Religion of Data ever looks at what we don’t measure because that would uncover disruptive truths. My latest book Will You Be Richer or Poorer?:

In the false religion of data, heresy is asking for data that is not being collected because it might reveal unpalatably unprofitable realities.

We have been indoctrinated into a new and false religion, the faith of data. We’ve been relentlessly indoctrinated with the quasi-religious belief that “data doesn’t lie,” when the reality is that data consistently misleads us because that is the intent.

Nobody in the False Religion of Data ever looks at what we don’t measure because that would uncover disruptive truths. My latest book Will You Be Richer or Poorer?: Profit, Power, and AI in a Traumatized World looks at everything consequential that we don’t measure, and since we don’t measure it, we assume it doesn’t exist. That’s the end-game of the False Religion of Data: what’s actually important isn’t measured and therefore it doesn’t exist, while what is measured is artfully packaged to support a narrative that enriches those behind the screen of “objective data-based science.”

The data-based con can be constructed in any number of ways. A few data points can be cleverly extrapolated to “prove” some self-serving claim, a bit of data can be conjured into a model that just so happens to support the most profitable policy option, inconvenient data points can be covertly deleted via “filtering out the outliers,” statistical trickery can be invoked (with a wave of this magic wand…) to declare semi-random data “statistically significant,” and so on, in an almost endless stream of tricks.

While the official statistics on inflation claim an annual rate of 2.5%, unmanipulated estimates (the Chapwood Index for example) find inflation is north of 10% in major U.S. urban areas.

The official data soothsayers’ bag of tricks include completely bogus, made-up “hedonic adjustments” which magically lower the price of real-world goods and services. Autos are supposedly “cheaper” now because they’re so much safer and reliable. Perhaps, but can we be honest and admit they cost a lot more than they did a generation ago?

The poor fools giving hundreds of millions of dollars to the con artists of Big Data Marketing apparently don’t understand the flimsiness of the “science.” As Mark, Jesse and I discuss in our latest Salon, Algorithmic Guerrilla Warfare, a few purposefully misleading data points turn the entire Big Data Marketing “science” into the familar “garbage in, garbage out.”

And so here we are in the midst of a pandemic, and the battles over “what the data tells us” sound more like religious wars than science. Everybody’s in such a hurry to conjure up a profitable con or make grandiose claims for their narrative that what we aren’t measuring is ignored.

Here’s the raw data I’d like to see collected:

Collecting this data is non-trivial, and so it may never be collected–partly because the results might not support the approved narratives: whatever data we don’t collect doesn’t exist and can’t disrupt our models, profit centers, narratives, policies, etc.

In the false religion of data, heresy is asking for data that is not being collected because it might reveal unpalatably unprofitable realities. Much safer to burn heretics at the stake than let them question the cons.

Our Wile E. Coyote Economy: Nothing But Financial Engineering

Ours is a Wile E. Coyote economy, and now we’re hanging in mid-air, realizing there is nothing solid beneath our feet. The story we’re told about how our "capitalist" economy works is outdated. The story goes like this: companies produce goods and services for a competitive marketplace and earn a profit from this production. These profits are income streams for investors, who buy companies’ stocks based on these profits. As profits rise, so do stock valuations. 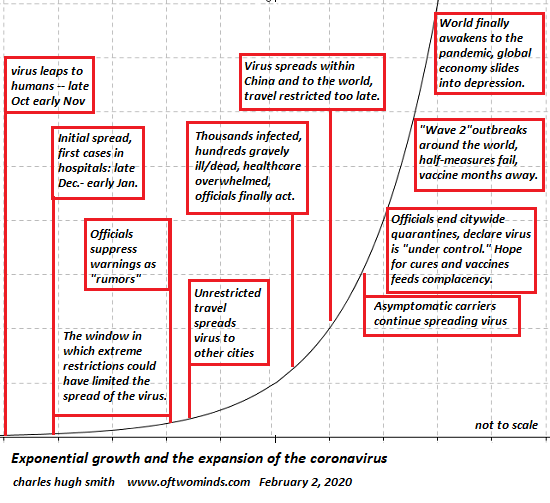 So what do we know with any sort of certainty about the claim that "the pandemic is over"? Very little. Is the pandemic over in China, Europe, Japan and the U.S./Canada? Is the much-anticipated V-Shaped economic recovery already baked in, i.e. already gathering momentum? The consensus, as reflected by the stock market (soaring), the corporate media and governmental easings of restrictions seems to be "yes" to both questions.

For the Rich to Keep Getting Richer, We Have to Sacrifice Everything Else

They’re hoping the endless circuses and trails of bread crumbs will forever distract us from their plunder and the inequalities built into America’s financial system.. The primary story of the past 20 years is the already-rich have gotten much richer, with destabilizing economic, social and political consequences.

The Illusion of Control: What If Nobody’s in Charge?

The last shred of power the elites hold is the belief of the masses that the elites are still in control. I understand the natural desire to believe somebody’s in charge: whether it’s the Deep State, the Chinese Communist Party, the Kremlin or Agenda 21 globalists, we’re primed to believe somebody somewhere is controlling events or pursuing agendas that drive global responses to events.

There were minimal changes to the status quo as the week commences. Bangladesh has announced revised trading hours on the local exchanges. No change of status in Nigeria and Kenya as they both continue to face limited liquidity. Please see trading comments below.

At readers' request, I've prepared a biography. I am not confident this is the right length or has the desired information; the whole project veers uncomfortably close to PR. On the other hand, who wants to read a boring bio? I am reminded of the "Peanuts" comic character Lucy, who once issued this terse biographical summary: "A man was born, he lived, he died." All undoubtedly true, but somewhat lacking in narrative.
My articlesMy siteMy booksAbout me
Follow on:Twitter
Previous World’s Ultra Wealthy Urged By Financial Advisers and Largest Banks to “Hold More Gold”
Next Dollar Firm as Risk-Off Sentiment Persists