by
Mark O'Byrne
My articles My books
Follow on:TwitterLinkedIN
Summary:
Published on Independent Trustee Company (27/05/2020) ◆ With the current level of uncertainty in world markets we have received numerous requests for information on how self directed pension schemes (pre and post retirement) can hold gold and silver. It is accepted that if gold bullion is held via a gold certificates ( Perth Mint Certificates with GoldCore) or in Secure Storage in a variety of local or international locations with GoldCore, then it is not considered a ‘pride in possession’ article or ‘tangible moveable property’, and so fulfills Revenue investment requirements for small self-administered pension schemes. This opportunity allows scheme members to avail of the diversification benefits and return potential of gold bullion in conjunction with other

◆ Prudent leaders in Eastern European countries are repatriating their national gold reserves and diversifying into gold due to geopolitical risks and monetary risks posed to the dollar, euro and pound◆ Slovakia has joined China, Russia and a host of countries buying gold or seeking to repatriate their gold from the Bank of England and the New York Federal Reserve◆ “Brexit and the risk of a global economic crisis put Slovak gold stored in Britain in a dangerous situation …”

◆ Gold is flowing to strong hands in safer forms of gold ownership, in safer jurisdictions. ◆ Gold and silver bullion coins and bars owned by GoldCore’s clients have been moved from Hong Kong to Singapore. ◆ Central bank and institutional gold rush is beginning as prudent money diversifies fx reserves by buying gold & repatriates their gold from London and New York. 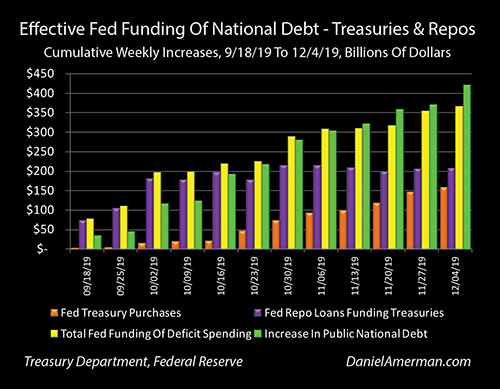 Fed Is Monetizing 90 percent of U.S. Deficit to Keep Interest Rates from Rising and Crashing Markets

By Daniel R. Amerman, CFAAs can be seen in the graph above, for the last 12 weeks there has been a stunning visual correlation between the yellow bars of the total weekly funding of deficits by the Federal Reserve, and the green bars of the weekly deficit spending by the United States government.

Buy gold and silver to hedge risks in 2020. IG interview Mark O’Byrne of GoldCore
With late cycle risks and concerns about global growth, many Wall Street analysts are increasingly bullish on gold. Mark O’Byrne, founder at GoldCore spoke to IGTV’s Victoria Scholar about the outlook for gold in 2020.He explained why most analysts including GoldCore are optimistic on both gold and silver.

Gold Gains As Bank of England Slashes to Emergency Rate of 0.25percent and ECB Warns Of 2008 Style “Great Financial Crisis”

◆ Gold prices rose by 0.6% today as the Bank of England slashed rates in an emergency move to 0.25% and the ECB looks set to follow as it warned of a 2008 style crisis overnight. ◆ The Bank of England slashed its main interest rate to 0.25 percent this morning in a emergency move to combat the fallout from the coronavirus outbreak on the UK economy.

Gold in USD – 3 Days Gold prices are 0.7% higher today after falling just 0.3% yesterday as traders sought refuge in safe haven gold as oil prices collapsed lower again. Oil slumped to nearly $15 a barrel, its lowest since 1999 as the economic fallout from government lockdowns and the shutting down of entire economies impacts risk assets and commodities dependent on economic growth.

◆ The massive global debt driven “Everything Bubble” is bursting due to the pandemic and more specifically the governments draconian economic lockdowns. ◆ A dollar crisis is inevitable with U.S. government debt surging by some $2 trillion in a matter of weeks and ballooning to over $25 trillion

I founded GoldCore more than 10 years ago and it has been my passion and a huge part of my life ever since. I strongly believe that due to the significant macroeconomic and geopolitical risks of today, saving and investing a portion of one’s wealth in gold bullion is both wise and prudent.
My articlesMy books
Follow on:TwitterLinkedIN
Previous FX Daily, May 29: Month-End Profit-Taking Weighs on Equities as the Euro Pops Above $1.11
Next Asia Lockdowns vs. Re-Openings