by
Charles Hugh Smith
My articles My siteMy booksAbout me
Follow on:Twitter
Summary:
As the exodus gathers momentum, all the reasons people clung so rabidly to urban meccas decay. If there is any trend that’s viewed as permanent, it’s the enduring attraction of coastal urban meccas: despite the insane rents and housing costs, that’s where the jobs, the opportunities and the desirable urban culture are. Nice, but like many other things the status quo considers permanent, this could reverse very quickly, and all those pricey urban meccas could become crime-ridden ghost towns. How could such a reversal occur? 1. Those in the top 10% who can leave reach an inflection point and decide to leave. The top 1% who live in enclaves filled with politicians, celebrities and the uber-wealthy see no reason to leave, as the police make sure no human feces land 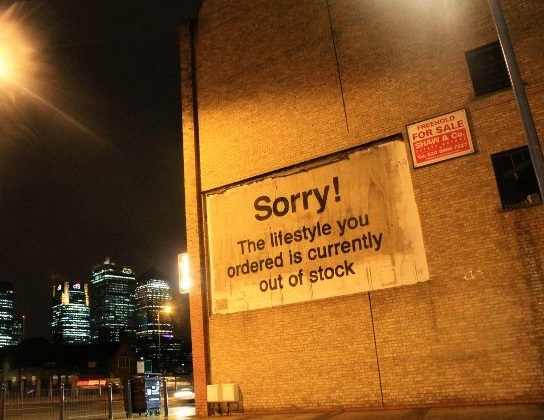 As the exodus gathers momentum, all the reasons people clung so rabidly to urban meccas decay.

If there is any trend that’s viewed as permanent, it’s the enduring attraction of coastal urban meccas: despite the insane rents and housing costs, that’s where the jobs, the opportunities and the desirable urban culture are.

Nice, but like many other things the status quo considers permanent, this could reverse very quickly, and all those pricey urban meccas could become crime-ridden ghost towns. How could such a reversal occur?

1. Those in the top 10% who can leave reach an inflection point and decide to leave. The top 1% who live in enclaves filled with politicians, celebrities and the uber-wealthy see no reason to leave, as the police make sure no human feces land on their doorstep.

It’s everyone who lives outside these protected enclaves, in neighborhoods exposed to exasperating (and increasingly dangerous) decay who will reach a point where the “urban lifestyle” is no longer worth the sacrifices and costs.

It might be needles and human feces on the sidewalk, it might be petty crime such as your mail being stolen for the umpteenth time, it might be soul-crushing commutes that finally do crush your soul, or in Berkeley, California, it might be getting a $300 ticket for not bringing your bicycle to a complete stop at every empty intersection on a city bikeway. (I’ve personally witnessed motorcycle officers nailing dozens of bicyclists with these $300 tickets.)

It might be something that shreds the flimsy facade of safety and security complacent urban dwellers have taken for granted, something that acts as the last grain of sand on the growing pile of reasons to get the heck out that triggers the decision.

Not everyone can move, but many in the top tier can, and will. Living in a decaying situation is not a necessity for these lucky few, it’s an option.

2. Those who have to leave when they lose their job. A funny thing happens in all economies, even those with central banks: credit-cycle / business-cycle recessions are inevitable, regardless of how many times financial pundits say, “the Fed has our back” and “don’t fight the Fed.”

As I’ve noted here numerous times, a great many small businesses in these pricey urban meccas are one tiny step from closing: one more rent increase, one more bad month, one more regulatory burden, one more health issue and they’re gone. They will move to greener pastures for the same reason as everyone else–they can’t afford to live in urban meccas.

Once enough of the top 10% leave (by choice or because they can no longer afford it), the food/beverage service industry implodes. Wait staff and bartending have been a major source of jobs in these urban meccas, and when hundreds of struggling establishments fold due to a 10% decline in their sales, thousands of these employees will lose their jobs and the prospects of getting hired elsewhere decline with every new closure.

The vast majority of these service employees are renters, paying sky-high rents that unemployment can’t cover. They will hang on for a few months and then cash in their chips and move to more affordable climes.

3. Once the stock market returns to historic norms, the gargantuan capital gains that supported local tax revenues and spending dry up. WeWork is the canary in the coal mine; from a $50 billion IPO to insolvency in six weeks.

Once tax revenues plummet (no more IPOs, hundreds of restaurants closing, etc.), cities and counties will have to trim their workforces to maintain their ballooning pension payments for retirees. This will leave fewer police and social workers available to deal with everyone with little motivation (or option) to leave: thieves, those getting public services and the homeless.

4. Housing prices and rents are sticky: sellers and landlords won’t believe the good times have ended, and so they will keep home prices and rents at nosebleed valuations even as vacancies soar and the market is flooded with listings.

Neighborhoods that had fewer than 100 homes for sale will suddenly have 500 and then 1,000, as sellers realize the boom has ended and they want out–but only at top-of-the-bubble prices.

Ironically, this stubborn attachment to boom-era prices for homes and rents accelerates the exodus. As incomes decline, costs remain sky-high, so the only option left is to move away, the sooner the better.

By the time sellers grudgingly reduce prices, it’s too late: the market has soured. The Kubler-Ross dynamic is in full display, as sellers go through the stages of denial, anger, bargaining and acceptance: they grudgingly drop the price of the $1.2 million bungalow or flat to $1.15 million, then after much anger and anguish, to $1.1 million, but the market has imploded while they processed a reversal they didn’t think possible: now sales have dried up, and prices are sub-$800,000 while they ponder dropping their asking price to $995,000.

Vacant apartments pile up, as the number of laid-off and downsized employees who can still afford high rents collapses. (Recall that tens of thousands of recent arrivals in urban meccas rely heavily on tips for their income, and as service and gig-economy business dries up, so do their tips.)

5. As the exodus gathers momentum, all the reasons people clung so rabidly to urban meccas decay: venues and cafes close, street life fades, job opportunities dry up, and yet prices for everything remain high: transport, rent, taxes, employees, etc.

Friends move away, favorite places close suddenly, streets that were safe now seem foreboding, and all the friction, crime, grime and dysfunction that was once tolerable becomes intolerable.

6. In response to deteriorating city and county finances, local government jacks up fees, tickets, permits and taxes, accelerating the exodus. How many $300 tickets, fees and penalties does it take to break the resolve to stick it out?

7. Those on the cusp cave in and abandon the mecca. Once those who had the option to leave have left, and those who can no longer afford to stay leave, the decay causes those on the cusp of bailing out to abandon ship.

Renters move out in the middle of the night, homeowners who have watched their equity vanish as prices went into freefall jingle-mail the keys to the house to the lender and small businesses that had clung on, hoping for a turn-around close their doors.

8. Each of these dynamics reinforce the others. Soaring taxes, decaying services, declining business, rising insecurity and stubbornly high costs all feed on each other.

And that’s how pricey urban meccas turn into ghost towns inhabited by those who can’t leave and those living on public services, i.e. those too poor to support the enormously costly infrastructure of public spending in the urban mecca.

The lifestyle you ordered is not just out of stock, the supplier closed down.

At readers' request, I've prepared a biography. I am not confident this is the right length or has the desired information; the whole project veers uncomfortably close to PR. On the other hand, who wants to read a boring bio? I am reminded of the "Peanuts" comic character Lucy, who once issued this terse biographical summary: "A man was born, he lived, he died." All undoubtedly true, but somewhat lacking in narrative.
My articlesMy siteMy booksAbout me
Follow on:Twitter
Previous USD/CHF technical analysis: Another attempt to defy 2-month-old rising wedge resistance
Next Swiss Retail Sales, August 2019: +1.3 percent Nominal and -1.4 percent Real