by
Acemaxx-Analytics
My articles My siteMy booksAbout me
Follow on:Twitter
Summary:
Jonathan Hopkin, Associate Professor of Comparative Politics, Department of Government, LSEIn your new book, you underline that political parties (“cartel parties”) were no longer competing over different models of economics. But why has social democratic position voluntarily tended to adopt a similar position?That’s a great question! I’m not sure I can really pin down the ...


In your new book, you underline that political parties (“cartel parties”) were no longer competing over different models of economics. But why has social democratic position voluntarily tended to adopt a similar position?

That’s a great question! I’m not sure I can really pin down the decisive factor. One standard view is that the constraints of open capital markets have enhanced the ‘blackmail power’ of investors and have disciplined social democratic parties into accepting orthodox economic policies, for fear of not being able to govern.

The bitter experience of Mitterrand’s early presidency in France in the 1980s had a chastening effect on social democratic parties across Europe, convincing many that there was ‘no alternative’ but to sign up to low inflation and tight fiscal policy.

But many have argued that there was an ideological shift in centre-left elites which led them to believe these pro-market policies were correct in their own right, perhaps best reflected in Tony Giddens’ ‘Third Way’ politics.


I am prepared to entertain a different view, for which as yet I haven’t accumulated enough evidence: that the organizational weakness of the parties, and their inability to maintain high levels of worker mobilization, explains a lot of the shift. It was necessary to fall into line with neoliberal economic thinking because social democratic parties no longer had the resources, in terms of grassroots members, to challenge the interests of the wealthy.


What chance does anti-system politics have to help ensure that after the abject failure of the neoliberal economic model a widespread shared economic prosperity is possible for all citizens?

There seems to be no putting the genie back in the bottle. Although there is a lot of confusion over what to do next, I see no appetite to return to austerity and more market liberalization.

The success of Trump on the right and Sanders on the left have exposed the political weakness of American neoliberalism, whilst even its erstwhile champions in the academy, such as Larry Summers, are turning towards a more interventionist stance.

Similarly, the bailouts during the Covid pandemic are making massive government outlays to protect economically exposed citizens more and more legitimate. Whether this achieves shared prosperity is less clear, but to the extent that that aim requires a return to the government flexing its economic policy muscles, we are certainly in a much different places to where we were in the mid-2010s.

It is an open secret that the EU is a neo-liberal project. Has the Eurozone now been doomed to fail after the collapse of neoliberal ideology?

Well that depends on what Eurozone policy makers decided to do in response. The early signs from the pandemic response suggest that, despite much wailing and gnashing of teeth, the key countries and institutions are still prepared to ‘do whatever it takes’ to save the euro.

They may fall short of reaching the optimal policy mix of fiscal burden-sharing and a more relaxed attitude to price stability, but it appears they will do enough to keep the monetary union going.

However, there is no prospect, I fear, of the kind of growth rates that would genuinely turn Europeans into Euroenthusiasts again. And while there is such skepticism and mistrust towards supranational cooperation, articulated especially by anti-system politicians of the right, it will be hard to get to where we need to be.

The recent spat between the Dutch-led self-styled ‘frugal four’ and the Southern Europeans is so easy and profitable for nationally-oriented politicians that we can expect it to continue, making good policy-making much harder than it needs to be.


Thank you very much

Jonathan Hopkin was awarded his doctorate in Social and Political Sciences from the European University Institute in 1995, and held lectureships at the Universities of Bradford, Durham and Birmingham before joining LSE in 2004.

His research has mostly focused on parties and elections in Western Europe (and specifically Italy, Spain, and the UK), with particular attention to corruption, political finance and territorial politics. 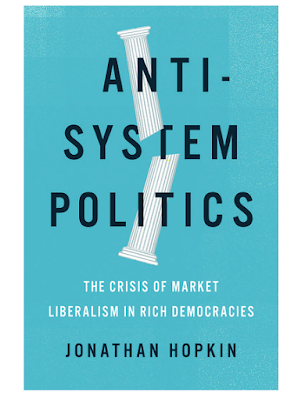