by
Jeffrey P. Snider
My articles My booksMy videos
Follow on:Twitter
Summary:
With the monthly Friday Payroll Ritual lurking tomorrow morning, and having been focused on PMI estimates before it, a quick look at the ISM’s Non-manufacturing PMI especially its employment index to bridge the latter to the former. The update today for the month of December put the headline estimate at 62.0, down from 69.1 the month prior. Omicron? While a rather sharp and unexpected 7-point drop, other than the size of the decline at 62.0 there’s little to suspect anything really off. This one’s been the outlier anyway; even among sentiment indicators for services if not US services sentiment. . Compared to IHS Markit’s, for instance, the ISM is in a place by itself, though that hasn’t been anything unusual. Ever since around the end of 2017, the index has

In fact, ever since April, the employment index for non-manufacturing has been more like 2019 or late 2015 than any other reflationary period.

With payrolls looming, it’s an interesting pre-release take on the employment situation from another perspective. As is the ISM Non-manufacturing overall which seems to be sticking with its historical biases, whatever you make of these December declines. 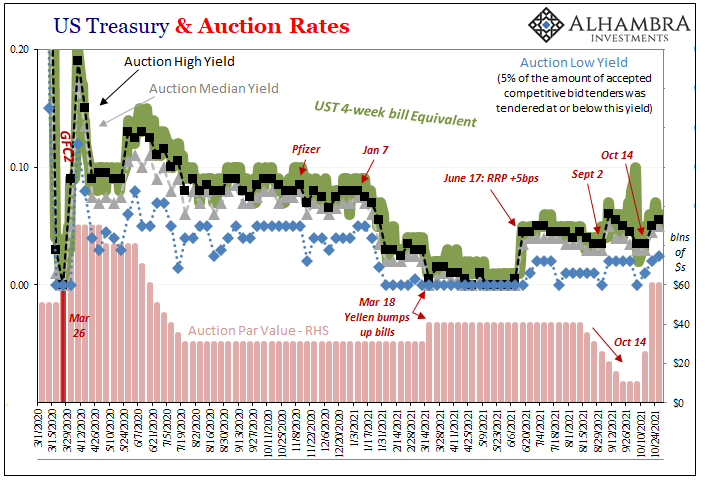 Treasury Secretary Janet Yellen hasn’t just been busy hawking cash management bills, her department has also been filling back up with the usual stuff, too. Regular T-bills. Going back to October 14, at the same time the CMB’s have been revived, so, too, have the 4-week and 13-week (3-month). Not the 8-week, though.

Hurricane Ida swept up the Gulf of Mexico and slammed into the Louisiana coastline on August 29. The storm would continue to wreak havoc even as it weakened the further inland it traversed. By September 1 and 2, the system was still causing damage and disruption into the Northeast of the United States. Weekly Market Pulse: Buy The Dip, If You Can

If you were waiting for a correction in stock prices to put some money to work, you got your chance last week. The Dow Jones Industrial Average was down nearly 1000 points at the low Monday and closed down 725, a loss of a little over 2%. The S&P 500 did a little better but closed down 1.5%.

Jeffrey P. Snider is the head of Global Investment Research of Alhambra Investment Partners (AIP). Jeffrey was 12 years at Atlantic Capital Management where he anticipated the financial crisis with critical research. His company is a global investment adviser, hence potential Swiss clients should not hesitate to contact AIP
My articlesMy books
Follow on:Twitter
Previous Switzerland writes off small portion of flight repatriation bill
Next No weakening expected in Swiss house prices