by
Claudio Grass
My articles My books
Follow on:TwitterLinkedIN
Summary:
Late last year, Barrick Gold, the world’s largest gold miner in terms of reserves, made headlines when it announced its acquisition of Randgold Resources, in an bn mega-merger that marked a key moment for the mining industry. In January, United States gold giant Newmont and principal rival of Barrick, made public its own plans to buy Canada’s Goldcorp, the world’s third-largest bullion producer by market value, for billion. The deal, that is largely expected to go ahead and be completed in the next quarter, will result in the creation of Newmont Goldcorp, the world’s largest producer by output, with the capacity to produce up to 7 million ounces of gold annually over the next decade and with operations in South America, Australia and Africa. Soon after the mammoth deal was

Late last year, Barrick Gold, the world’s largest gold miner in terms of reserves, made headlines when it announced its acquisition of Randgold Resources, in an $18bn mega-merger that marked a key moment for the mining industry. In January, United States gold giant Newmont and principal rival of Barrick, made public its own plans to buy Canada’s Goldcorp, the world’s third-largest bullion producer by market value, for $10 billion. The deal, that is largely expected to go ahead and be completed in the next quarter, will result in the creation of Newmont Goldcorp, the world’s largest producer by output, with the capacity to produce up to 7 million ounces of gold annually over the next decade and with operations in South America, Australia and Africa.

Soon after the mammoth deal was announced, Barrick sent shockwaves across the industry once again, by announcing its intentions to take its greatest leap yet and launch a hostile bid for Newmont Mining, in a deal that would create a leviathan in the global gold sector. Even though in early March Newmont’s Board of Directors rejected Barrick’s $17.8 billion overture, options are still on the table for joint ventures and other partnerships. Furthermore, the fact that the Barrick-Newmont deal didn’t go through did nothing to discourage the M&A fervor that is sweeping the industry.

This intensified merger activity is not limited to the major mining companies either, despite the headlines and investor attention they often monopolize. In 2018 alone there were 1,349 mining deals valued at $86.3 billion, according to data compiled by Bloomberg. That’s an increase of 60% from 2017, bringing the total activity volume to a five-year high. As for the gold sector specifically, mergers and deal-making seem to be back in vogue, and quite decisively so, despite the relative inactivity in previous years. 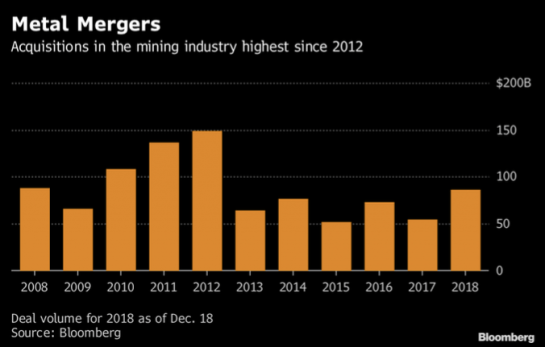 The last decade has been a challenging time for gold miners, with weaker prices, increased pressure from shareholders and a race to cut costs and slash debt. Operational difficulties and the widespread, urgent need to replenish their pipelines, have also added to the troubles of mining companies across the board. At this stage, having already made cuts and amped up their efficiency, the larger problem, the need of actual gold in their existing operations is becoming increasingly apparent.

To a very large extent, the value, competitiveness and operational sustainability of a gold miner depends on the amount of gold in the ground that the company controls. This is especially relevant and pressing need for the major miners. Due to the scale of their operations, their set-up and their established production levels, they need to replenish their resources even faster, just to remain at the same competitive and production levels. For example, Barrick, which has seen rapid growth, now needs to add considerable deposits just to avoid stagnation. According to a report by Morningstar, “Having recently acquired Randgold, Barrick will produce 4-5 million ounces annually”, meaning that the company will need to feed that production capacity with reserves each year, otherwise its resources could shrink.

Overall, when the existing reserves run thin, the miner has two options. They can either invest in exploration activities and projects in order to find new deposits to tap, which is costly and can have sometimes varying results, or they can simply buy other companies, with already proven and economically mineable deposits. In recent years, it has become clear that the latter process is cheaper and makes more strategic sense.

This trend of consolidation in the gold mining sector is only set to become more dominant, as the pressure mounts on smaller mining companies as well. As the world’s largest gold miners combine their powers to get even bigger, mid-tier operations will need to look for partners too and increase their own M&A activities just in order to be able to compete. What makes this scenario even more probable, is the fact that regulatory scrutiny for these deals in the gold sector is not nearly as intense as in other corners of the market. As most of the world’s gold is already in circulation, and gold miners add only a small percentage of the precious metal to the market, regulators do not tend to place as many obstacles to merger deals as they often do in other industries, where consumer concerns or over-consolidation fears are more frequently cited.

Over the last decade, against the backdrop of cheap credit and loose money, the environment that central banks the world over have set up, spending frenzies and acquisitions with borrowed money have become commonplace in the corporate world. Short-sighted decisions, based on incentives to spend rather than save, and the capacity to borrow vast amounts at an extremely low cost, continue to be encouraged by the current stance of the Fed and other central banks. As they back-pedal on their previous announcements of decisive monetary tightening, it seems unlikely that we will see meaningful steps in that direction any time soon. And of course, with cheap credit masking the true financial state, sustainability and overall health of many companies that would have perished without it, the widespread, even systemic, dangers of persisting on this path are not only daunting, but also imminent, as was highlighted by Dr. Krall in our recent interview (LINK).

An exception to the rule

This, however, is largely not the case with the merger trend in the gold mining sector, which has not been flooded with cheap credit. Given past pressure by shareholders to cut debt and to adopt a leaner, more efficient approach, most M&A activity has taken place on much more sound financial grounds, while the reasons behind the decision were more influenced by real needs and strategic aims, rather than the current monetary policy environment. For example, Barrick’s moves were justified by operational synergies and economies of scale, while the overall merger activity in the gold mining industry can also be understood as an effort to increase the market capitalization of a small sector that needs to attract investors and boost its appeal in the market.

Overall, the gold mining sector appears to be evolving, catching up and likely has a bright future. Nevertheless, it is important for investors to do their own due diligence when considering a specific investment and to make up their own minds, according to the facts and figures of each individual case. After all, an investment in a gold mining company must still be seen and understood as a move geared towards profits, with a certain amount of risk and speculation involved.

That being said, especially given that I’m not a mining analyst, the key take-away from my side is always the same. Look out for the right people who have already built up a reputation, a solid track record and created value in this particular industry. For example, such a person is Mark Bristow, the CEO of Barrick today, whose insights and outlook I personally value when it comes to the gold mining industry, as he is definitely among the people who can separate the signal from the noise.

Finally, I would like to underline that an investor considering the mining business has a very different set of parameters and goals to think about than an investor who prefers to focus on long-term wealth preservation. If one looks at precious metals through the lens of wealth protection and as a way to hedge against the risks of the banking and financial system, it is important to own physical gold and silver, especially in a safe jurisdiction that respects private property rights. Once you have built up this insurance, you can invest in this industry which should perform nicely over the coming years, although there is more risk involved.

This article has been published in the Newsroom of pro aurum, the leading precious metals company in Europe with an independent subsidiary in Switzerland. All rights remain with the author and pro aurum.

Always up to date: Follow pro aurum on Social Media

So, you won’t miss a thing! Information and chart analyses, gold and silver news, market reports, as well as our discount campaigns and events.

Claudio Grass is a passionate advocate of free-market thinking and libertarian philosophy. Following the teachings of the Austrian School of Economics he is convinced that sound money and human freedom are inextricably linked to each other. He is one of the founders of GoldAndLiberty.com.
My articlesMy books
Follow on:TwitterLinkedIN
Previous “Today’s EU is the embodiment of bureaucratic hubris”
Next Sound money: A Biblical perspective – Part I