Home / SNB & CHF / The Battle over the Free Market

The Battle over the Free Market

by
David Gordon
My articles My booksMy videos
Follow on:
Summary:
Nicholas Wapshott is a British journalist and biographer with a strong interest in economic theory. He says that the Nobel laureate Edmund Phelps is his mentor. One theme in twentieth-century economics dominates his work: the clash between economists who favor the free market and those who support a “mixed economy,” in which the government plays a large role. Wapshott’s earlier book Keynes Hayek shows the way he works. He uses the personal relations between Keynes and Hayek to arouse the reader’s interest in the theoretical controversies at issue, and he follows the same approach in Samuelson Friedman. Keynes and Hayek make frequent appearances in this book as well. Here, though, Wapshott has an advantage over his earlier book. Although Keynes and Hayek knew each 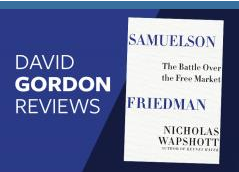 Nicholas Wapshott is a British journalist and biographer with a strong interest in economic theory. He says that the Nobel laureate Edmund Phelps is his mentor. One theme in twentieth-century economics dominates his work: the clash between economists who favor the free market and those who support a “mixed economy,” in which the government plays a large role. Wapshott’s earlier book Keynes Hayek shows the way he works. He uses the personal relations between Keynes and Hayek to arouse the reader’s interest in the theoretical controversies at issue, and he follows the same approach in Samuelson Friedman. Keynes and Hayek make frequent appearances in this book as well. Here, though, Wapshott has an advantage over his earlier book. Although Keynes and Hayek knew each other, they were not especially close, but Samuelson and Friedman were friends and rivals for over seventy years. Wapshott thus had available much more source material for his new book.

He is a diligent researcher, as his forty-three pages of notes attest. We learn, for example, that the remark “you cannot push on a string,” comes not from Keynes but from Congressman T. Alan Goldsborough in 1933. The remark is a criticism of the government’s increasing the quantity of money in order to get out of a depression; the point of the phrase is that giving people more money may not be enough to get them to spend it.

Wapshott clearly prefers Samuelson to Friedman. For him, Samuelson was the great theorist of post–World War II economics. Friedman, by contrast, though he had a powerful intelligence and formidable skill as a debater, was in essence a crank who preached the discredited doctrine of monetarism. Wapshott says of Samuelson, “His myriad technical papers, which flowed from him with such facility, would have been a towering achievement for any academic economist. His application of mathematics to economics transformed the discipline from something akin to a branch of philosophy to a true social science.” He rates Friedman much lower. “His many achievements are more evident in politics than in economics. . . . Some of Friedman’s theoretical economics, such as his work on the consumption function, continues to be admired. But few have continued to hanker after Friedman’s flagship idea, doctrinaire monetarism, which is remembered, if remembered at all, as an arcane, otiose footnote in the history of economic thought.”

The text of the book fails to support Wapshott’s portrayal of Samuelson as a towering genius. The author devotes considerable attention to the columns that Samuelson and Friedman wrote for Newsweek, and in them, the towering genius often comes across as a purveyor of banalities. He holds the bizarre belief that if you don’t want to associate with someone, you are coercing him. Also, people who can’t afford things they want to buy are being coerced by the sellers of these products. Thus, it’s wrong to claim, as Friedman does, that government regulation of property is coercive. It’s always a question of balancing one freedom against another, and shouldn’t we prefer the freedom of the poor person able to buy food to the freedom of the seller to refuse to sell? Besides, human rights are more important than property rights.

“‘The rights of property shrink as the rights of man expand,’ he wrote. While some suffered because the government intervened in the market, an unfettered market had winners and losers, too, he argued. While the free market suggested that everyone was free to buy what they wanted, there was such a thing as rationing by price, which put many items well beyond the reach of those without the means. The children of those who could not afford good education, for instance, were deprived by the market setting too high a price. The ‘freedom’ of individuals provided by the market was therefore only notional.” Samuelson in this area thinks in clichés of the Left.

Samuelson was throughout his long life a Keynesian, and he took over from Keynes a bad argument against Hayek’s The Road to Serfdom. According to this argument, Hayek claims in the book that comprehensive economic planning destroys freedom. But Hayek himself does not favor a complete free market but allows some scope for government intervention. Given this admission, there is no principled division between Hayek and his opponents. All are supporters of a mixed economy, though people differ on the components of the mixture.

It does not follow from Hayek’s failure to draw a principled line between permissible and impermissible intervention that “we are all in the same boat.” It remains the case that planning on a vast scale destroys freedom. You cannot tell exactly how many hairs a person can have on his head and still count as bald, but there are bald people and people who aren’t bald. In like fashion, if we have “too much” planning, freedom will end. The objection of Keynes and Samuelson thus leaves Hayek’s argument unscathed. We can see today without difficulty what Hayek is talking about, as the government is destroying our freedom through covid-19 lockdowns, mask mandates, and vaccination mandates. Wapshott mentions the covid-19 situation, but rather than take it as evidence that government interference with the market is dangerous, he instead takes it to show that in emergencies, government must supplant the market.

It is true, though, that Hayek made unnecessary compromises about government intervention, and this leads to the funniest passage in the book: “To [Ayn] Rand, even Hayek was a treacherous compromiser and—Rand’s behavior was as extreme as her politics—she once spat at Hayek at a party to show her disdain for his treachery.”

In his duels in Newsweek with Samuelson, Friedman often defends freedom with able arguments, but his economic theory is lacking. His “monetarism” is really a form of Keynesianism, but it is the Keynes of the 1920s rather than the 1930s whom he follows. “The summer of 1923 saw Keynes give talks that when collected became A Tract on Monetary Reform. . . . A Tract became an inspiration for counter-Keynesian revolutionaries like Friedman: ‘I am one of a small minority of professional economists who regard [A Tract] not the General Theory, as [Keynes’s] best book on economics,’ wrote Friedman in 1989. ‘Even after sixty-five years, it is not only well worth reading but continues to have a major influence on economic policy.’ Friedman’s often-quoted one-liner that ‘Inflation is taxation without legislation’ derives from the Tract chapter heading, ‘Inflation as a Method of Taxation.’”

In brief, Friedman supports government control of the money supply to prevent inflation and deflation. Hayek expertly identifies the fundamental problem with Friedman’s approach. “Austrian economists like Hayek believed such an approach would fail, as no one could know enough about the workings of the economy to manage it with any accuracy. . . . He always complained that Friedman was closer to Keynes than Hayek was to either of them. ‘In one respect, Milton Friedman is still a Keynesian, not on monetary theory but on methodology,’ Hayek explained. By accepting the premises of macroeconomics—a branch of economics that Keynes had invented, ‘very much against his own intentions,’ according to Hayek—Friedman had made a serious intellectual error. . . . It was not just that Friedman had signed up to Keynes’s macroeconomics rather than join the Austrian School, which relied solely on microeconomic activity, that caused Hayek offense. Friedman’s belief that the money supply should be controlled by the central bank to keep prices in check put him firmly on the Keynesian side of the argument over whether government should manage the economy.” Hayek also said in the 1990s, “‘One of the things I most regret is not having returned to a criticism of Keynes’s [General Theory]’ . . . ‘but it is as much true of not having criticized Milton’s [Essays in] Positive Economics, which in a way is quite as dangerous a book.’”

In turn, Friedman had no use for Austrian economics. Though he admired Hayek for his defense of freedom, he thought that Hayek’s Prices and Production was a confused book and opposed giving him a position in the University of Chicago’s department of economics. “The Chicago School ‘didn’t want him,’ recalled Friedman. ‘They didn’t agree with his economics. . . . If they had been looking around the world for an economist to add to their staff, their prescription would not have been . . . the author of Prices and Production.’” He thought that Mises was dogmatic and intolerant, and “[a]sked which was the greater economist, Keynes or von Mises, Friedman did not hesitate to answer, ‘Keynes.’” By the way, Samuelson, though of course a strong critic of Hayek, was pleased that he won the Nobel Prize. ‘In my judgment his was a worthy choice,’ said Samuelson.”

Readers who are aware of the way in which Arthur Burns tried to prevent Murray Rothbard from getting his doctorate at Columbia will find this anecdote of interest, and it is a suitable note on which to close. Samuelson in commenting on Alan Greenspan, says, “At bottom Greenspan was an okay character. That’s different from Rand and Burns—both despicable human beings.”

GDP Tells Us Little about the Health of an Economy

Purchasing Power Matters! Andrew shares what and why it matters to him. Governments and Central Banks are depriving the people from the fruits of their labor and ability to save for the future.

Share your thoughts in the comment section below. Tell your story and let the world hear why Purchasing Power Matters to you.

Visit the PPM website for details on how to share your story and to read informative articles.
https://www.purchasingpowermatters.co

Mandating private and government employees to be immunized against covid-19 and requiring the use of standardized electronic passes as proof of immunization across the nation is what liberty is made of, the editors of the Washington Post argued last week.

As the force of the New Deal reached its heights, both foreign and domestic, during World War II, a beleaguered and tiny libertarian opposition began to emerge and to formulate its total critique of prevailing trends in America. 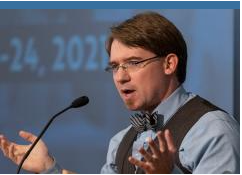 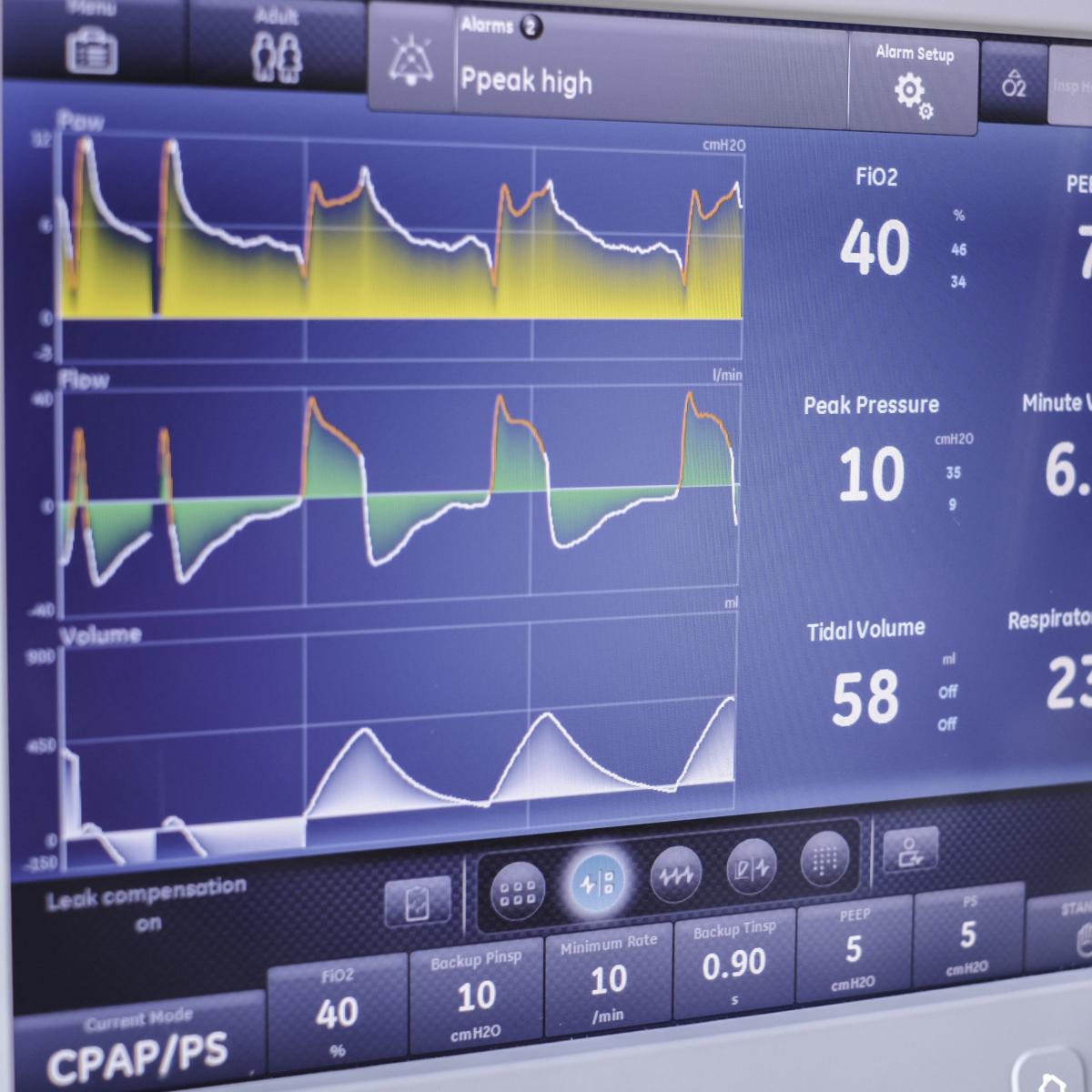 Can Economics Save Medicine?

First, in a certain sense medicine in America is broken. Doctors and patients are unhappy, the quality of care deteriorates, and costs keep increasing. Even before covid, US life expectancy declined three years running. Even before covid, too many Americans were sick, depressed, fat, and unhappy with their physical and mental health.

My articlesMy books
Follow on:
Previous Santa’s Revenge: Everyone Front-Running My Rally, You Get Nothing
Next Bitcoin erholt sich sofort wieder von Flashsale

Santa’s Revenge: Everyone Front-Running My Rally, You Get Nothing