by
Win Thin
My articles About meMy booksMy videos
Follow on:LinkedIN
Seeking Alpha
Summary:
Re-shutdowns continue to spread across the US; the dollar has come under pressure again Jobs data is the highlight ahead of the long holiday weekend in the US; weekly jobless claims will be reported FOMC minutes were revelatory; the Fed for now will rely on “outcome-based” forward guidance and asset purchases to achieve its goals; US House passed the latest China sanctions bill The UK offered a home to nearly 3 mln Hong Kong citizens; Russia President Putin will likely be around for much longer, but the real risk is a new round of sanctions Japan’s ruling LDP is discussing how to attract finance professionals from Hong Kong; Korea reported June CPI Re-shutdowns continue to spread across the US. New York and California banned or delayed reopening of certain

Re-shutdowns continue to spread across the US. New York and California banned or delayed reopening of certain services such as indoor dining. Meanwhile, hospitalization rates continue to increase in states such as Texas and Arizona where the case count has spiked recently. Elseward, Tokyo is seen an increase in its outbreak with 100 new cases registered overnight. On the positive side, there has seen some good news from early trials of experimental vaccines from Pfizer and BioNTech. Also, the UK is gearing up for “Super Saturday” as pubs restaurants, and hotels reopen this weekend.

The dollar has come under pressure again. After DXY traded Tuesday at the highest level since June 2, it is down three straight days and is on track to test the June 23 low near 96.385. A break below that would set up a test of the June 10 low near 95.716. The euro is testing the $1.13 area while sterling is testing the $1.25 area. USD/JPY recorded an outside down day yesterday after failing to make a clean break above 108, setting the pair up for further losses.

Jobs data is the highlight ahead of the long holiday weekend in the US. Consensus sees a gain of 3.058 mln jobs in June, up from 2.509 mln in May. Unemployment is expected to fall to 12.5% from 13.3% in May, but the data have been rife with errors the past two months. Yesterday, ADP reported a lower than expected 2.369 (vs. 2.9 mln consensus) private sector jobs while the ISM employment component of 42.1 suggests manufacturing jobs are still contracting. Note that continuing claims for the June survey week fell -767k. Compare this to May, when continuing clams for the survey week fell -4.1 mln and May NFPs came in at +2.5 bln. All these clues suggest market consensus around 3 mln is way too optimistic. Indeed, we see significant risks that the US economy will underperform Europe and Japan in Q3.

The FOMC minutes were surprisingly revelatory. Typically, Fed minutes reveal little new about the deliberations, but the ones for the June 10 meeting yielded some nuggets. First of all, Chair Powell opened the meeting expressing concerns with the “deeply troubling events of the last two weeks. Injustice, prejudice, and the callous disregard for life had led to social unrest and a sense of despair.” Powell has often noted that the pandemic impact has been felt disproportionately by lower income minorities, whilst touting that a broad-based recovery lifts all boats. As the virus continues to spread in the US, we think means a rising likelihood that rates will be left lower for longer.

Next, policymakers discussed the need to develop a more explicit form of forward guidance (either outcome- and calendar-based). Most seem to favor the former. Some felt the forward guidance should signal a willingness to allow inflation to temporarily overshoot its 2% target, while others felt guidance should focus on its full employment mandate given the current state of the labor market. Lastly, the Fed discussed yield curve yield caps or targets (the Fed’s version of yield curve control) in earnest. Some expressed concerns about how YCT could increase the Fed’s balance sheet by too much, leading to potential instability. In closing, the Fed noted that “Many participants remarked that, as long as the committee’s forward guidance remained credible on its own, it was not clear that there would be a need for the committee to reinforce its forward guidance with the adoption of a YCT policy.” 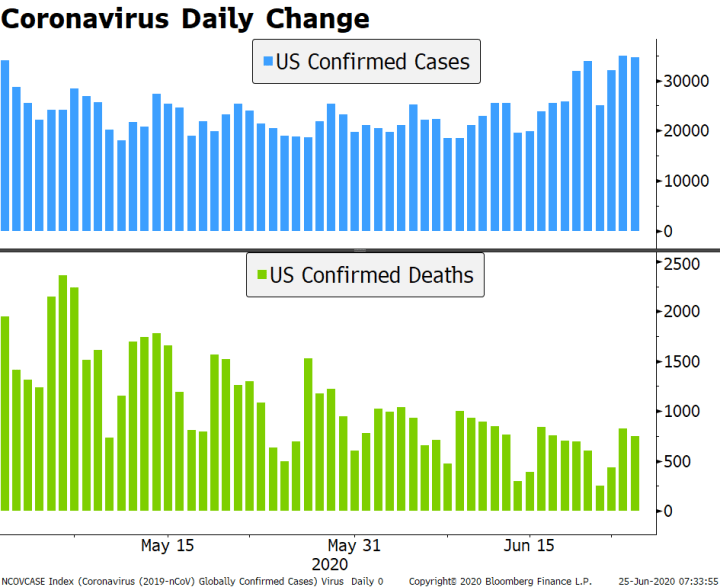 Higher infection numbers in the US and other countries continue to fuel risk aversion across global markets; the IMF released more pessimistic global growth forecasts yesterday. The US has rekindled trade provocations against China through Huawei; weekly jobless claims will be reported; regional Fed manufacturing surveys for June will continue to roll out.

Dollar Firms, Equities Sink Ahead of ECB Decision as US Fails to Deliver

President Trump spoke to the nation last night and did little to calm markets; reports suggest that the Democrats are working on a bill. Fed easing expectations are intensifying. The ECB decision will be out at 845 AM ET; over the past 17 ECB decision days, the euro has finished lower in 11 of them.

It was a relatively good weekend in virus-related news; measures of implied volatility continue to trend lower. The dollar is trying to build on its recent gains; investors continue to try and gauge just how bad the US economy will get hit. The outlook for oil prices remains highly uncertain and volatile.

Win Thin is a senior currency strategist with over fifteen years of investment experience. He has a broad international background with a special interest in developing markets. Prior to joining BBH in June 2007, he founded Mandalay Advisors, an independent research firm that provided sovereign emerging market analysis to institutional investors. He received an MA from Georgetown University in 1985 and a B.A. from Brandeis University 1983. Feel free to contact the Zurich office of BBH
My articlesAbout meMy books
Follow on:LinkedINSeeking Alpha
Previous How Historians Changed the Meaning of “Liberalism”
Next Swiss government forecasts 2021 deficit but no tax hikes