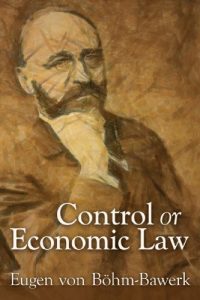 Eugen von Böhm-Bawerk was a giant of the Austrian School. Control or Economic Law, written in 1914, gets to the heart of the matter regarding the application of economics to politics. Either we let economic law run its course, he says, or we destroy the engine of prosperity. We must defer to economic law or we make matters worse by attempting to control society.

In short, this is a scientific but impassioned call for economic liberalization from the grand old man who learned from Carl Menger and then taught Ludwig von Mises his economics. It demonstrates that economic liberalism has long been part of the foundation of the political worldview of the Austrian tradition.

Until now, there haven’t been any monograph-length ebooks to show off the core of Böhm-Bawerk’s thought. Control or Economic Law is just such an approachable introduction to this great thinker.

The Individual and the Welfare State: Life Histories in Europe