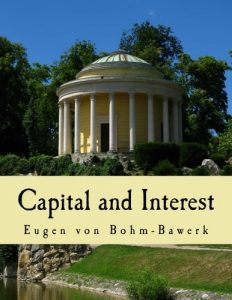 The great economist and finance minister of the Austro-Hungarian Empire is a pillar of the Austrian School. As a champion of the new marginalist school, this great work brought him more fame than even Carl Menger had in his day. Here is the original English translation by Scottish economist William Smart, the one that had the largest impact on the American and British economic scene, and the one that remains lucid and penetrating. This edition is the first time it has been available in more than half a century. With depth and lucidity, Boehm-Bawerk surveys and critiques failed theories of interest from antiquity to modern times, presents a full theory of the structure of production, and defends the importance of capital in production and time in the determination of the interest rate. The broad implications of this work are being rediscovered today by younger Austrians building on his foundation for Austrian production theory. It’s not only economics being addressed here. As Mises said, this voluminous treatise is the royal road to understanding of the fundamental political issues of our age.