by
Bruno S. Frey
My articles My siteMy booksAbout me
Follow on: 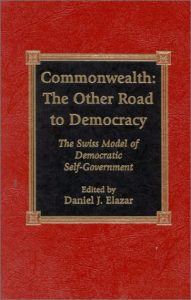 The late Daniel J. Elazar was increasingly concerned with the distortions of democracy in contemporary society. In Commonwealth, he brought together a distinguished group of political scientists to examine the Swiss model of democracy, in its original emphasis on community, or the “commonwealth.”
Contributors to the volume take the Swiss model as a base from which to critique the liberal model, best exemplified by the United States. While it is admittedly the best contemporary example of liberal democracy, or “civil society,” America also displays the problems of this model. The modern idea of communal democracy has almost completely disappeared from the United States, contributors argue. In incisive and cogent essays, they suggest that the modern idea of communal democracy may not just be an alternative but a needed antidote to many of the problems with the American system. The scholars gathered in this important collection explore the question of how to maintain both community and liberty while at the same time adjusting to changes in the scale of political organization needed for economic prosperity and defense. The results yield a unique perspective on contemporary democracy for political theorists and concerned lay readers alike.