by
Bill Bonner
My articles My siteMy booksAbout me
Follow on:Twitter 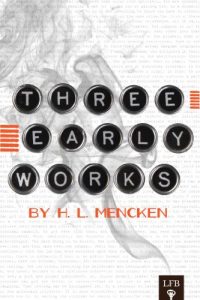 H.L. Mencken presents master styling in A Book of Prefaces (1917), Damn! (1918), and The American Credo (1920). Prefaces is a book of literary criticism containing the essays “Joseph Conrad,” “Theodore Dreiser,” “James Huneker,” and “Puritanism as a Literary Force.” He hoped that “they may at least blow a wind through the prevailing fogs, and reveal what is sound and important in some first-rate books.” The ensuing intellectual battle energized a generation. Damn! A Book of Calumny contains some of Mencken’s wittier turns in its 49 short essays. It has been mined for anthologies, but it has never before been reprinted as a whole. The American Credo: A Contribution Toward the Interpretation of the National Mind contains 488 articles, co-written by drama critic George Jean Nathan, about American popular belief.

To search for titles from Laissez Faire Books, enter a keyword and LFB; e.g., Economics LFB

Bill Bonner founded Agora, Inc in 1978. It has since grown into one of the largest independent newsletter publishing companies in the world. He has also written three New York Times bestselling books, Financial Reckoning Day, Empire of Debt and Mobs, Messiahs and Markets. A man of many talents, his entrepreneurial savvy, unique writings, philanthropic undertakings, and preservationist activities have all been recognized and awarded by some of America's most respected authorities.
My articlesMy siteMy booksAbout me
Follow on:Twitter
Previous The Beginning Of The End
Next Language Variation – European Perspectives IV: Selected papers from the Sixth International Conference on Language Variation in Europe (ICLaVE 6), Freiburg, June 2011 (Studies in Language Variation)

The Beginning Of The End