Capital and Interest (3 Volumes in 1) 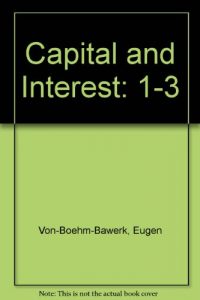 Boehm-Bawerk’s magnum opus, one of the greatest achievements in the history of economic thought. In fact, it is a Magna Carta of the capitalistic production process. In an economic order based on production, income from capital investment provides the very basis of the system and a livelihood for a large middle class, as well as capitalists and entrepreneurs. All observations about the nature and appraisals of the value of capitalism hinge upon the explanation of this capital income. Capital and Interest is divided into three parts:

The first volume History and Critique of Interest Theories, is a diligent and persuasive analysis of virtually all capital income theories. It is a critical history of interest doctrines that defend or oppose capital income. The second volume, Positive Theory of Capital, contains much more than the title seems to indicate. It presents a comprehensive theory of the entire production process. In particular, it elaborates on the principles that govern the allocation of incomes, that is, the amounts of interest, wage, and profit. Boehm-Bawerk offers a persuasive solution to all questions of income and theories of distribution. In Volume III, Further Essays on Capital and Interest, the publisher collected additional explanations and commentaries by the author. It comprises fourteen brilliant briefs explaining, elaborating, and defending the Positive Theory. It contains such great essays as “The Role of Disutility in the Value Theory” and “The Size of the Initial Fund that is Necessary for a Given Production Period.”