Home / Book / The Austrian Theory of Value and Capital: Studies in the Life and Work of Eugen Von Bohm-Bawerk

The Austrian Theory of Value and Capital: Studies in the Life and Work of Eugen Von Bohm-Bawerk 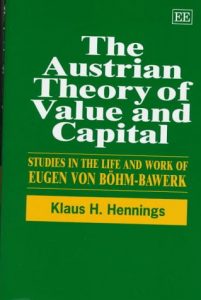 This account of the work of Eugen von Bohm-Bawerk describes his theory of value, capital and interest within the context of 19th-century German economic thought and the development of neo-classical economic theory. It provides an insight into Bohm-Bawerk’s intellectual development, and his political leanings and personal background. The study also considers the development of economic thought in the 18th century in Germany and Austria. It critically analyzes the work and contribution of Bohm-Bawerk and concludes that his analysis belongs to traditional 19th-century German economic thought. Closely related to this is the clarification made by the author of what is genuinely “Austrian” in the “Austrian theory of value and distribution”. To complement the study of Bohm-Bawerk, this book also contains an English translation of his letters to Knut Wicksell.

My articlesMy books
Follow on:Twitter
Previous Mastering and Using Corel Wordperfect 7
Next Not Just for the Money: An Economic Theory of Personal Motivation