by
Acemaxx-Analytics
My articles My siteMy booksAbout me
Follow on:Twitter
Summary:
Branko Milanovic is a visiting presidential professor at The Graduate Center, CUNY, and a senior scholar at the Stone Center on Socio-economic Inequality.You discuss in your new outstanding book two variants of modern capitalism: “political capitalism” (China and Vietnam) and “liberal capitalism” (the West). What is the strong selling point of “political capitalism”? And how ...

Branko Milanovic is a visiting presidential professor at The Graduate Center, CUNY, and a senior scholar at the Stone Center on Socio-economic Inequality.

If it could perform like that without other interfering elements, it would dominate liberal capitalism simply because richer countries are seen as models to emulate.

But one should not forget that similar view was held with respect to Soviet socialism some half-century ago: namely, that it would be able to achieve high growth rates despite local inefficiencies.

Thus, in assessing the potential of political capitalism, we have to take into account its weak points too. They are (as I argue in the book) systemic corruption which is due to the absence of the rule of law and its lack of full political consultation (lack of agency).

Both render the system less stable than liberal capitalism. Sufficient dissatisfaction can then lead to political disturbances and even to a change of regime.


China does not have a single ally. Why not? Is Beijing’s model of political capitalism (therefore) not transferable?

One has to distinguish political capitalism as a system from China as its main protagonist. China's lack of allies is due to the suspicion that many of China's neighbors have regarding China's ultimate political ambitions, and to the fact that China comes to the world stage rather late, when most of the allies have already been "distributed".

Furthermore, China has historically shown little inclination to export its model. This however may change in the years to come. Belt and Road Initiative and the creation of the Asian Infrastructure Investment Bank are the first indications that China may wish to play a more important global role.

To some extent these initiatives mirror the global initiatives that the United States implemented after the end of the Second World War. Chinese initiatives are also more serious (simply because there is more of an economic clout) than what the Soviet Union managed to do during the Cold War.

A separate issue is whether political capitalism may appeal to other countries. There, I think, the situation is clearer:

it might, as many countries in Asia (Vietnam, Laos, Burma, Singapore, even Malaysia), (Africa (Ethiopia, Rwanda, Algeria, Angola), Europe (Russia, Turkey, Belarus, Serbia, Montenegro, Hungary) and Central Asia exhibit features of political capitalism. The influence of China may not be so relevant as such; it is the system that the political elites in those countries might find appealing, not necessarily alliance with China.

Today’s globalization is accompanied by labor’s loss of bargaining power and the stagnation of wages. How do you think the third unbundling will affect the viability of the welfare state and human rights?

The third unbundling should in principle mimic a worldwide labor market. (That market is currently segmented by national borders since labor, unlike capital, cannot move freely.)

The power of labor in rich countries would be even further reduced--simply on account of an ever greater ability of less paid (and equally skilled) labor from poorer countries to compete.

The power of labor in poorer countries will augment. But dynamically, we must also take into account a steady increase in capital and a global stagnation of population.

These two developments must, over a longer time horizon, change the relative bargaining power of labor vs. capital. One can imagine that at some point in the future the relative abundance of capital might become such that the entrepreneurial function gets taken over by labor; that is, workers or single individuals organize production and simply borrow capital.

This is something that we already see in the start-up world. That does not mean that privately owned capital fails to get a return, but it could mean that it loses the role of entrepreneur that has historically been associated with ownership of capital.


Thank you very much

Branko Milanovic is visiting presidential professor and core faculty at the Stone Center on Socio-Economic Inequality at the Graduate Center, City University of New York. He was formerly lead economist in the World Bank’s research department. 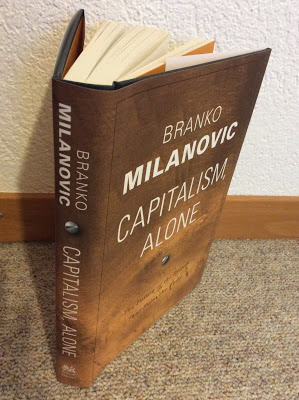 His new book: “Capitalism, alone” is published by Harvard University Press in Sept 2019.