by
Swissinfo
My articles My booksMy videos
Follow on:TwitterFacebookGoogle +
Summary:
Building large solar parks in high-mountain regions is arguably an effective way to produce more power in winter and accelerate the energy transition. But it remains controversial in Switzerland, where environmental groups have contested planned installations. Born in London, Simon is a multimedia journalist who has worked for www.swissinfo.ch since 2006. He speaks French, German and Spanish and focuses on science, technology and innovation issues. More from this author | English Department Research shows that putting solar panels on mountaintops in the Swiss Alps could generate at least 16 terawatt-hours (TWh) of electricity a year, or almost half of the solar power the authorities aim to produce annually by 2050. Large mountain solar projects exist in


Investec writes Switzerland has too many pigs, leading to animal welfare concerns 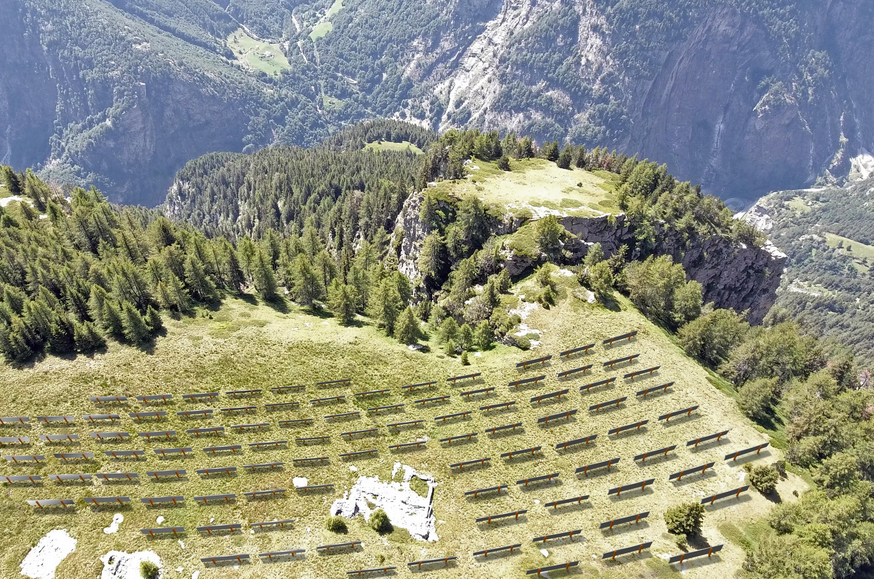 Building large solar parks in high-mountain regions is arguably an effective way to produce more power in winter and accelerate the energy transition. But it remains controversial in Switzerland, where environmental groups have contested planned installations.

Born in London, Simon is a multimedia journalist who has worked for www.swissinfo.ch since 2006. He speaks French, German and Spanish and focuses on science, technology and innovation issues.

Research shows that putting solar panels on mountaintops in the Swiss Alps could generate at least 16 terawatt-hours (TWh) of electricity a year, or almost half of the solar power the authorities aim to produce annually by 2050. Large mountain solar projects exist in some regions in China, and small solar parks can be found in the mountains in France and Austria. But big installations are currently rare in the Swiss Alps.

Panels are typically fitted to existing infrastructure such as mountain huts, ski lifts or dams, like at Muttsee in central Switzerland, 2,500 metres above sea level. The Alpine country currently gets 6% of its electricity from the sun.

Yet the climate crisis and urgency surrounding winter energy shortages are causing a fundamental rethink. This autumn a handful of parliamentarians led a solar offensive to simplify and speed up the construction of Alpine solar systems.

In parallel, new proposals have emerged to set up solar farms on pristine pastures. Two projects in the southern Swiss canton of Valais are in the spotlight: one above the village of Gondo, near the Simplon Pass, and a bigger scheme at Grengiols to the north.

The Gondosolar project (see video below) involves the installation of 4,500 solar panels on ten hectares – 14 football pitches – of private land on a mountain close to the Swiss-Italian border. It would produce 23.3 million kilowatt hours (KWh) of electricity annually, or enough for at least 5,200 local homes, according to Renato Jordan, the promoter who owns the plot.

Jordan’s CHF42 million ($43 million) project has the backing of the Gondo-Zwischbergen municipality and the power company Alpiq but is hotly disputed. In August a group of environmental activists organised a small but noisy demo on the pasture at an altitude of 2,000 metres where it would be built.

“We totally agree about the potential of solar energy, but we think there’s huge potential on existing buildings and infrastructure,” Maren Kern, executive director of Mountain Wilderness Switzerland, told SWI swissinfo.ch. “We don’t see the need to go into these virgin undeveloped sites before you have used all the potential that is already there.”

According to the Federal Energy Office, fitting panels to existing building roofs and façades could provide 67 TWh of solar-powered electricity annually – well above the authorities’ goal of producing 34 TWh a year by 2050 (2.8 TWh was produced in 2021).

Experts say Alpine solar parks offer certain advantages, mainly that most of the power would be produced in winter when supplies are critical.

“In the Alps you have a lot of sunshine, especially in winter, and you can produce solar energy above the clouds,” Christian Schaffner, executive director of the Energy Science Centre at federal technology institute ETH Zurich, told Swiss public television, SRF.

He added that solar panels are most efficient in the low temperatures of the high Alps and that two-sided panels can be fixed upright to catch more rays bouncing off the snow and ice.

But there are still many unknowns regarding Alpine solar farms, especially the costs, economic benefits and suitable locations.

Gondosolar promoters estimate their project would produce twice as much electricity per square metre as a comparable facility in the lowlands.

They argue that their solar park is not planned in a protected area or at risk of natural hazards such as avalanches, and it would not be visible from nearby villages. An application has been filed to integrate the project into cantonal plans, and a decision is pending. But it will not help plug any potential energy shortages this winter as completion is not expected before 2025.

Meanwhile, a much larger solar farm is planned at 2,000 metres’ altitude on a mountain near the village of Grengiols.

“The Grengiols-Solar project could be realised immediately and would bring an additional energy output of 1 TWh,” Valais Senator Beat Rieder told the Tages-Anzeiger newspaper. This could in theory meet the electricity needs of a city of 100,000-200,000 residents.

Environmentalists are anxious as the huge facility – the equivalent of 700 football pitches – would be located in the Binntal Nature Park, which has the distinction of being a “Regional Nature Park of National Importance”.

Armin Zeiter, president of the municipality of Grengiols, rejects the idea that solar panels would disfigure the landscape.

“For me, renewable energy is about preserving nature,” he told SRF. The communal authorities voted in favour of the CHF750 million project in June. They hope work can be started soon. But a planning application has not yet been submitted and many open questions remain, such as the suitability of the site and how the system will be connected to the grid. The German-language weekly Die Wochenzeitung recently reported some local opposition to the project.

The two solar projects have been advancing slowly against a backdrop of feverish activity in the Swiss capital, Bern. Politicians are grappling with pressing questions on climate action, future energy supply, dependence on Russian gas, and measures to get the country through the winter.

Recently, parliament agreed a CHF3.2 billion climate action package to help Switzerland meet its long-term CO2 goals. It should also partly address Switzerland’s immediate energy security that has been threatened by the Russian invasion of Ukraine.

Parliament also agreed that more ambitious targets are needed to double the amount of renewable energy produced in Switzerland by 2035 and increase the production of solar electricity in lowland regions and in the Alps.

Rieder and a group of other senators pushed for lighter-touch rules so that large solar installations in the Alps can be implemented quickly. Environmentalists were shocked to hear them call for the scrapping of environmental impact assessments and detailed planning procedures for solar farms.

Parliament ultimately agreed on a more moderate approach that complies with the Swiss constitution. Large Alpine solar plants producing over ten GWh per year can benefit from federal funds (up to 60% of investment costs) and easier planning procedures.

But the Swiss legislative body also decided that such Alpine solar parks, viewed as emergency measures, should not be installed in protected nature zones. They must also be dismantled at the end of their lifetime. New buildings with a surface area bigger than 300m2, anywhere in the country, must also install solar panels.

Reacting to the decision, Mountain Wilderness said it was “relieved that the completely free pass to industrialise the Alps” had been prevented. But it remains unhappy with the outcome, which it considers “watered down” because the building size requirement eliminates single-family homes and other smaller buildings.

The Franz Weber Foundation called parliament’s support for large Alpine solar parks “irresponsible” and said it should be challenged by a referendum.

Pro Natura, for its part, welcomed the fact that parliament had dropped the “most objectionable, unconstitutional provisions” like the removal of environmental impact studies.

“But the acceleration of solar projects will still take place primarily at the expense of nature – on Alpine open spaces,” spokesperson Nathalie Rutz told SWI swissinfo.ch.

Businesses, meanwhile, have not been slow to react and other projects may soon be in the pipeline. Since parliament passed the law easing regulations for building high-altitude solar farms, seven big Swiss electricity companies have reportedly started looking around for options.

The Neue Zürcher Zeitung newspaper wrote last week that the Solalpine interest group is to scout the country for up to ten possible locations for vast mountaintop solar parks, before launching discussions with local authorities, citizens and stakeholders.

SWI swissinfo.ch – the international service of the Swiss Broadcasting Corporation (SBC). Since 1999, swissinfo.ch has fulfilled the federal government’s mandate to distribute information about Switzerland internationally, supplementing the online offerings of the radio and television stations of the SBC. Today, the international service is directed above all at an international audience interested in Switzerland, as well as at Swiss citizens living abroad.
My articlesMy books
Follow on:TwitterFacebookGoogle +
Previous Slavery Did Not Promote Capitalism: The New Economic History of Capitalism Is Simply Wrong
Next The Hardheaded Thought of Ludwig von Mises: Ever Attacked and Ever Triumphant