by
Jeffrey P. Snider
My articles My books
Follow on:Twitter
Summary:
The numbers just don’t add up. Even if you treat this stuff on the most charitable of terms, dollar for dollar, way too much of the hole almost certainly remains unfilled. That’s the thing about “stimulus” talk; for one thing, people seem to be viewing it as some kind of addition without thinking it all the way through first. You have to begin by sizing up the gross economic deficit it is being haphazardly poured into – with an additional emphasis on “haphazardly.” Everyone forgets the last time when the government tried this, impressing markets and the media with its huge numbers, that after it was over its proponents complained how it wasn’t big enough. Paul Krugman most of all (seriously, in November 2009, long afterward, he wrote Obama’s plan was awesome

Even if we consider every single dollar as if it gets issued and becomes a dollar spent or distributed (which won’t happen) into this enormous real economic gap, that’s a little over $2.2 trillion combined which barely covers the second quarter’s deficit. And that’s if everything goes right and before we even consider the differences in timing (something about “shovel-ready” rings a bell).

Economists will try to claim there are multiplier effects through all of this activity, which are supposed to further boost the impact of these big numbers even if they don’t end up being one-to-one. But even if there is some positive multiplier, how much of it is, as experience has shown, canceled out by negative multipliers associated with a -35% nominal decline?

The country’s experience with ARRA should have been enough to put that myth to bed for good (as well as the Bush “tax credits” payments, up to two-thirds of which were saved rather than spent).

Again, even if we assume dollar for dollar the government’s spending hits the real economy in gross nominal output, that still leaves a deficit of substantially greater than $1 trillion. It’s no wonder the constant government talk of having to do more; the hole really is this big.

To put this into context, let’s compare it to the same exercise run using the Great “Recession.”

Keeping it to only the six quarters officially declared as recession (Q1 2008 up to and including Q2 2009), the total amount of lost output back then was about $900 billion (assuming the same conservative 4% baseline). And, importantly, we have to stop with those six quarters because, as you can see above, the recovery never came; the economic deficit was never filled, not even close, and had continued onward until the present time despite layers and layers of “stimulus.”

The ”L”, in other words, where before all the Fed’s and feds’ “inflationary” “stimulus” was assumed to be effective, too. Wrongly, as it turned out.

When dealing with numbers this big, precision isn’t nearly so important. Rough guesses and spit-balling are a good place to start because in this size of a ballpark even getting close should open your eyes.

Under what I’d consider the best possible scenario, dollar for dollar government stimulus, un-multiplied but parred up, this would still leave us with a gap somewhat bigger than the one (on a percentage basis) we call the Great “Recession.” If everything goes just perfectly, including the best economic “growth” ever seen in Q3, we’ll be lucky if it totals up to be a repeat of the 2008 and early 2009 experience in the economy.

That’s not a “V” and just the scale of these numbers were a big reason why the Great “Recession” didn’t produce one, either. If my numbers end up being in the same ballpark, this explains the deflationary circumstances all-too-well. Doesn’t matter how big the government “rescue”, the economy has already gone one (trillion) bigger (in the hole).

Stagnation Never Looked So Good: A Peak Ahead

Forward-looking data is starting to trickle in. Germany has been a main area of interest for us right from the beginning, and by beginning I mean Euro$ #4 rather than just COVID-19. What has happened to the German economy has ended up happening everywhere else, a true bellwether especially manufacturing and industry. 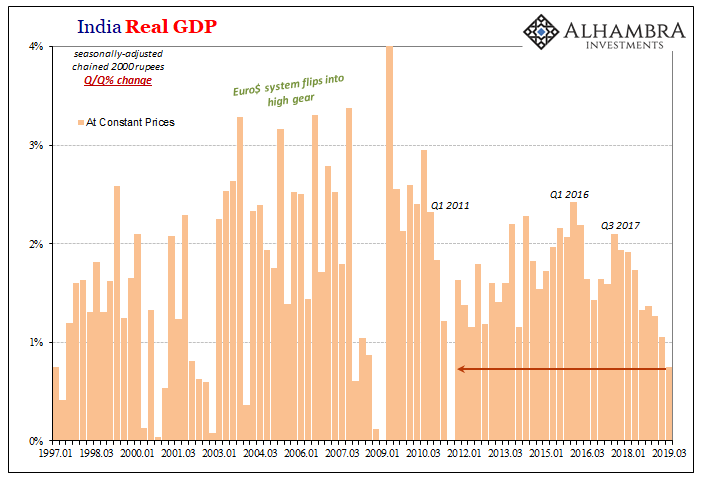 Back in April, while she was quietly jockeying to make sure her name was placed at the top of the list to succeed Mario Draghi at the ECB, Christine Lagarde detoured into the topic of central bank independence. At a joint press conference held with the Governor of the Reserve Bank of South Africa, Lesetja Kganyago, as the Managing Director of the IMF Lagarde was asked specifically about President Trump’s habit of tweeting disdain in the direction of the Federal Reserve’s Chairman, Jay Powell.

Eurostat confirmed earlier today that Europe has so far avoided recession. At least, it hasn’t experienced what Economists call a cyclical peak. During the third quarter of 2019, Real GDP expanded by a thoroughly unimpressive +0.235% (Q/Q). This was a slight acceleration from a revised +0.185% the quarter before.

The FOMC Channels China’s Xi As To Japan Going Global

The massive dollar eruption in the middle of 2014 altered everything. We’ve talked quite a lot about what Euro$ #3 did to China; it sent that economy into a dive from which it wouldn’t escape. And in doing so convinced the Chinese leadership to give growth one more try before changing the game entirely once stimulus inevitably failed.

March 15 was when it all began to come down. Not the stock market; that had been in freefall already, beset by the rolling destruction of fire sale liquidations emanating out of the repo market (collateral side first). No matter what the Federal Reserve did or announced, there was no stopping the runaway devastation.

Jeffrey P. Snider is the head of Global Investment Research of Alhambra Investment Partners (AIP). Jeffrey was 12 years at Atlantic Capital Management where he anticipated the financial crisis with critical research. His company is a global investment adviser, hence potential Swiss clients should not hesitate to contact AIP
My articlesMy books
Follow on:Twitter
Previous Why Congressional “Oversight” of the Bureaucracy Is No Such Thing
Next Swiss have mixed feelings about working from home, according to survey