by
Acemaxx-Analytics
My articles My siteAbout meMy booksMy videos
Follow on:Twitter
Summary:
Diane Coyle is the Bennett Professor of Public Policy at the University of CambridgeSince GFC 2008, the issue of economic progress has been at the center of academic discourse and social media. What do we mean when we talk about economic progress making life better? In general terms, we mean the innovations driving better health, longer ...

In general terms, we mean the innovations driving better health, longer lives and more day to day comfort and enjoyment. The standard metric of progress for 80 years has been GDP, despite its well-known shortcomings.

Those shortcomings – failing to account for environmental costs, ignoring unpaid work, and increasingly not measuring the digital economy – are becoming ever more prominent but there is no consensus about what should dethrone GDP.

Both inflation and unemployment are undesirable. Yet unemployment makes people five times as miserable. Why do the majority of economists still focus on inflation, which the Fed says is transitory because of supply chain disruptions, base-effect etc.?

There’s a huge debate about how transitory the inflation will be – so we don’t know either way. The importance of higher inflation is the longer-term misery it causes if not halted, even at the expense of some (short-term) rise in unemployment.

People on low incomes that don’t keep pace and people with modest savings suffer greatly when inflation gets embedded. And many countries could do a lot of other things to bring down high unemployment rates.

When can a labor market be considered to be at capacity? So far, this question has been answered, roughly speaking, with trends from the past. Do we need to measure growth and progress in new ways in a digital economy?

These are two questions.

One, my preferred metric is getting long-term unemployment as low as possible. If people who lose their jobs can find a new one (of reasonable pay and job quality) quickly, that’s ok. But unemployment isn’t a simple phenomenon.

Two, yes we do and this is work in progress. There are no settled answers yet.

Thank you very much.

Diane Coyle is the Bennett Professor of Public Policy at the University of Cambridge and she co-directs the Bennett Institute where she heads research under the themes of progress and productivity.

Her next book “Cogs and Monsters”: What Economics is and What it Should be” is published on 12 October 2021 by Princeton University Press. 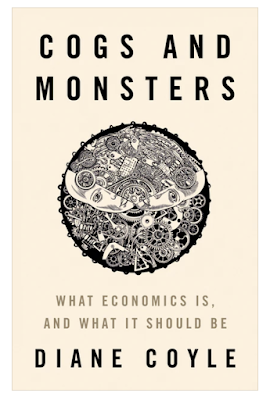