by
Greg Michalowski
My articles My booksMy videos
Follow on:
Summary:
SNBs Jordan Strong CHF limits swiss inflation See no sign swiss wage price cycle Inflation stubbornly above 2% would lead to policy tightening Difficult to say whether global rates have turned, much still depend on economic development CHF has remained stable in real terms Asked about real estate prices, Jordan says monetary policy aims primarily at price stability The SNB is not investing in crypto currencies The USDCHF has moved to new session lows (higher CHF) and in the process has moved below the 100 hour MA at 0.92677. The 38.2% at 0.9246 is the next target on the downside. Stay below the 100 hour MA is now a close risk for the sellers. USDCHF falls below the 100 hour MA [embedded content]

The latest trial could see the introduction of central bank digital currency move a step closer in Switzerland. The SNB says that they integrated the digital currencies into payment systems and used them in simulated transactions involving UBS, Credit Suisse, Goldman Sachs, and Citigroup.

Why do Central Banks want higher inflation? The debt ceiling debate in U.S. Congress and related political nonsense brings even more to light the exponential growth in US federal government debt. US government debt has doubled in the 10 years since the last major debacle Congress created over raising the debt ceiling back 2011.

The Inflation Tide is Turning!

In our post on January 28, 2021 “Gold, The Tried-and-True Inflation Hedge for What’s Coming!” we outlined four reasons that we expect higher inflation over the next several years.

The Changing Role of Gold

In our post on August 11 titled End of an ERA: The Bretton Woods System and Gold Standard Exchange, we discussed the significance of then-President Nixon’s action of closing the gold window thereby ending the Bretton Woods Monetary system.

Under the Bretton Woods monetary system, central banks could exchange their US dollar reserves for gold. This also ended the gold fixed price of US$35 per ounce.

This week we explore the two questions that concluded last week’s article: What role can gold serve in the international financial system in the future? And why do central banks continue to increase their gold reserves?

Starting with the latter question of why central banks continue to increase their gold reserves?

This is an important factor in the gold market and therefore 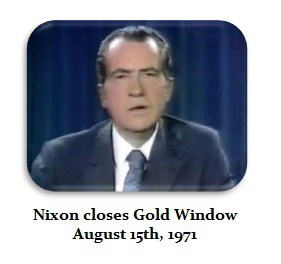 Putting the World on a Paper Standard Half a century ago one of the most disastrous monetary policy decisions in US history was committed by Richard Nixon.  In a television address, the president declared that the nation would no longer redeem internationally dollars for gold.  Since the dollar was the world’s reserve currency, Nixon’s closing of the “Gold Window” put the world on an irredeemable paper monetary standard.

In our July 29 post titled How Gold Stacks Up Against Stocks, Property, Commodities and Big Macs! we showed readers charts of gold as a ratio to other assets and products. We discussed that gold competes with crypto and stocks for the investment dollars.

My articlesMy books
Follow on:
Previous What to do with abandoned stables? A thorny issue in Switzerland
Next How Not to Think About Gold