Home / SNB & CHF / Is a Cultural Revolution Brewing in America?

Is a Cultural Revolution Brewing in America?

by
Charles Hugh Smith
My articles My siteAbout meMy booksMy videos
Follow on:Twitter
Summary:
The lesson of China’s Cultural Revolution in my view is that once the lid blows off, everything that was linear (predictable) goes non-linear (unpredictable). There is a whiff of unease in the air as beneath the cheery veneer of free money for almost everyone, inequality and polarization are rapidly consuming what’s left of common ground in America. Though there are many systemic differences between China and the U.S., humans in every nation are all still running Wetware 1.0 and so it is instructive to consider what can be learned from China’s Cultural Revolution 1966-1976. China’s Cultural Revolution was remarkably different from the Party’s military-political victory of 1949. Where the political revolution was managed by the centralized hierarchy of the

The lesson of China’s Cultural Revolution in my view is that once the lid blows off, everything that was linear (predictable) goes non-linear (unpredictable).

There is a whiff of unease in the air as beneath the cheery veneer of free money for almost everyone, inequality and polarization are rapidly consuming what’s left of common ground in America.

Though there are many systemic differences between China and the U.S., humans in every nation are all still running Wetware 1.0 and so it is instructive to consider what can be learned from China’s Cultural Revolution 1966-1976.

China’s Cultural Revolution was remarkably different from the Party’s military-political victory of 1949. Where the political revolution was managed by the centralized hierarchy of the Communist Party (CCP), the Cultural Revolution quickly morphed from a movement launched by Mao into a decentralized mass movement against all elites, including Party and state elites which had been sacrosanct and untouchable.

The Cultural Revolution is not an approved topic in China today, and that alerts us to its importance.

Although ostensibly launched by Mao (as part of his 1966 purge of Party rivals), the Cultural Revolution very quickly devolved into a decentralized, semi-chaotic movement of Red Guards, students and other groups who shared ideas and programs but who acted quite independent of the Party’s central leadership. (In systems language, semi-chaotic dynamics are emergent properties.)

If you examine Mao’s statements that supposedly launched The Cultural Revolution, you’ll find they’re not much different from his many pronouncements in the 1950s and early 1960s, none of which sparked a violent national upheaval. The Cultural Revolution cannot be traced back to Mao’s control or plans; rather, Mao served as the politically untouchable inspiration for whatever measures the local cadres deemed necessary in terms of advancing (or cleansing) the people’s revolution.

The important point here is that the Cultural Revolution was not controlled by the political authorities, even as they maintained control of the Party and central government hierarchy in Beijing. But this was nothing more than an illusion of control: the forces of the Cultural Revolution had broken free of central command and control, even as the Red Guards expressed their loyalty to Mao and the principles of the Party as the politically approved cover for their rampage.

That’s the irony of Cultural Revolutions: the authorities cannot claim it is a political counter-revolution because the cultural revolutionaries proclaim their loyalty to the ideals and principles the authorities claim to be upholding.

Cultural Revolutions in effect claim the higher ground, eschewing political influence for direct action in the name of furthering the ideals which the authorities have abandoned or betrayed.

Given the fragmentary nature of The Cultural Revolution, the history is equally fragmentary– especially given the official reticence.

A recent academic book,Agents of Disorder: Inside China’s Cultural Revolution, provides granular detail on the fragmented, decentralized, rapidly evolving dynamics of the movement:

“(The author) devoted decades to examining the local records of nearly all of China’s 2,000-plus county-level jurisdictions. He found that factions emerged from the splintering, rather than the congealing, of class-based groups. Small clusters of students, workers, and cadres struggling to respond to Mao’s shifting directives made split-second decisions about whom to align with. Political identities did not shape the conflict; they emerged from it. To explain this process of identity formation, he offers a theory of ‘factions as emergent properties’ and suggests that similar dynamics may characterize social movements everywhere.”

In other words, groups modified their alliances, identities and definitions of “class enemies” on the fly, entirely free of central authorities. Factions splintered, regrouped and splintered again. In the chaos, no one was safe.

Those who lived through The Cultural Revolution are reticent about revealing their experiences. Even in the privacy of their homes in the U.S., their voices become hushed and their reluctance to give voice to their experiences is evident.

The unifying thread in my view is the accused belonged to some “counter-revolutionary” elite –or they were living vestiges of a pre-revolutionary elite (children of the landlord class, professors, etc.)–and it was now open season on all elites, presumed or real.

What generates such spontaneous, self-organizing violence on a national scale?

My conclusion is that cultural revolutions result from the suppression of legitimate political expression and the failure of the regime to meet its lofty idealistic goals.

Cultural revolutions are an expression of disappointment and frustration with corruption and the lack of progress in improving everyday life, frustrations that have no outlet in a regime of self-serving elites who view dissent as treason and/or blasphemy. 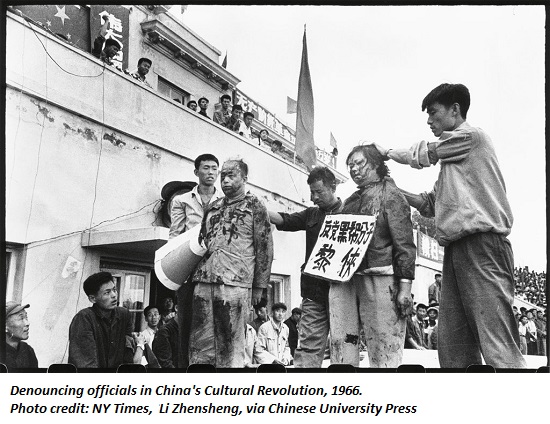 By 1966, China’s progress since 1949 had been at best uneven, and at worst catastrophic:
the Great Leap Forward caused the deaths of millions due to malnutrition and starvation, and other centrally planned programs were equally disastrous for the masses.

Given the quick demise of the Let a Hundred Flowers Bloom movement of open expression, young people realized there was no avenue for dissent within the Party, and no way to express their frustration with the Party’s failure to fulfil its idealistic goals and promises.

When there is no relief valve in the pressure cooker, it’s eventually released in a Cultural Revolution that unleashes all the bottled-up frustrations on elites which are deemed politically vulnerable. These frustrations have no outlet politically because they’re threatening to the status quo.

All these repressed emotions will find some release and expression, and whatever avenues are blocked by authorities will channel the frustrations into whatever is still open.

A Cultural Revolution takes the diversity of individuals and identities and reduces them into an abstraction which gives the masses permission to criticize the abstract class that “deserves” whatever rough justice is being delivered by the Cultural Revolution.

As the book review excerpt noted, the definition of who deserves long overdue justice shifts with the emergent winds, and so those at the head of the Revolution might find themselves identified as an illegitimate elite that must be unseated.

I submit that these conditions exist in the U.S.: the systemic failure of the status quo to deliver on idealized promises and the repression of dissent outside “approved” (i.e. unthreatening to the status quo) boundaries.

What elite can be criticized without drawing the full repressive powers of the central state? What elite will it be politically acceptable to criticize? I submit that “the wealthy” are just such an abstract elite.

To protect itself, a repressive status quo implicitly signals that the masses can release their ire on an abstract elite with indistinct boundaries–a process that will divert the public anger, leaving the Powers That Be still in charge.

But just as in China’s Cultural Revolution, central authorities will quickly lose control of conditions on the ground. They will maintain the illusion of control even as events spiral ever farther from their control. The falcon will no longer hear the falconer.

In other words, once the social pressure cooker valve gives way, then the unleashed forces soon grasp that there are few limits on what they can criticize as long as they do so within an implicitly approved narrative–for example, “the wealthy” hoarded wealth and power and so it is just to claw it back by whatever means are available. Since the government failed to do so, the people will have to do so.

The extreme inequalities of wealth and power that are now the dominant dynamic in America are heating the cultural pressure cooker, and when the pressure can no longer be contained, then being recognized as wealthy will shift very quickly from something desirable to something to avoid at all costs.

The lesson of China’s Cultural Revolution in my view is that once the lid blows off, everything that was linear (predictable) goes non-linear (unpredictable, fragmented, contingent, emergent, prone to extremes, uncontrollable). If America experiences a Cultural Revolution, the outcome won’t lend itself to tidiness or predictability.

To use an analogy from previous blog posts, if the pendulum is pushed to an extreme, when it’s released, it will reach an equivalent extreme (minus a bit of friction) at the opposite end. That could be an unexpected but entirely foreseeable Cultural Revolution.

Those who claim that can’t happen in America are safely outside the pressure cooker, protected by a delusional confidence that since I’m doing great, everyone is doing great. Since real political agency is no longer allowed, then the pressure will find release outside the political system. It’s just Wetware 1.0 running defaults few recognize. 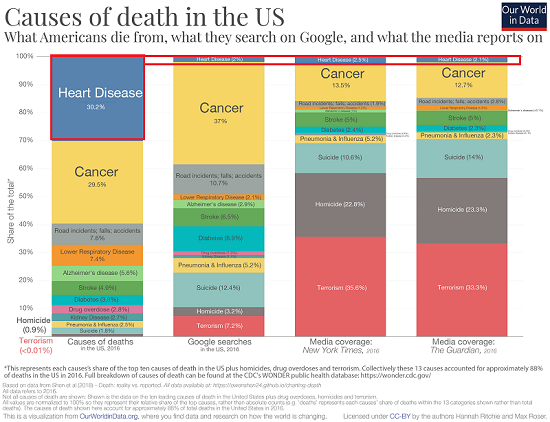 Health, Wealth and What Kills Most of Us

If health is wealth, and it most certainly is the highest form of wealth, then we would be well-served to take charge of our health-wealth in terms of what behaviors we can sustainably modify. 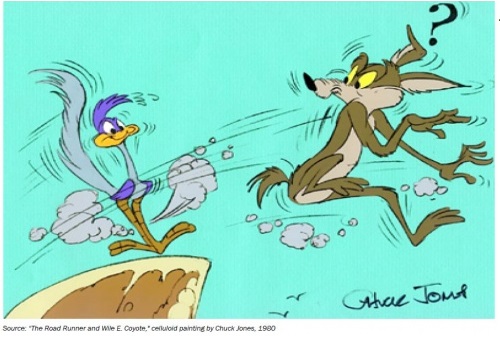 Gains Are Unreal, Losses Are Real

Why would anyone sell when further gains are guaranteed? Because the gains are unreal but the losses are real. When markets are soaring and your portfolio is rocketing higher, the gains seem unreal.

If we have indeed begun a sustained "reversal of fortune", it might be prudent to consider the possibility we’re only in the first inning of a sustained run of back luck.

The Coming War on Wealth and the Wealthy

Here’s looking at you, Federal Reserve–thanks for perfecting ‘legalized looting’ and neofeudalism in America.

No Wonder the Super-Rich Love Inflation

Asset inflation benefits the super-rich more than anyone else because they own the vast majority of these assets. With the reflation euphoria running full blast, maybe central banks will finally get all that inflation they’ve been pining for. So let’s ask cui bono–who will benefit from inflation?

At readers' request, I've prepared a biography. I am not confident this is the right length or has the desired information; the whole project veers uncomfortably close to PR. On the other hand, who wants to read a boring bio? I am reminded of the "Peanuts" comic character Lucy, who once issued this terse biographical summary: "A man was born, he lived, he died." All undoubtedly true, but somewhat lacking in narrative.
My articlesMy siteAbout meMy books
Follow on:Twitter
Previous FX Daily, April 12: Capital Markets Look for Direction
Next What Exactly Is Neoliberalism, and Is It a Bad Thing?