by
Pater Tenebrarum
My articles My siteAbout meMy booksMy videos
Follow on:TwitterFacebook
Seeking Alpha
Summary:
Chaos in Overnight Funding Markets Most of our readers are probably aware that there were recently quite large spikes in repo rates. The events were inter alia chronicled at Zerohedge here and here. The issue is fairly complex, as there are many different drivers at play, but we will try to provide a brief explanation. There have been two spikes in the overnight general collateral rate – one at the end of 2018, which was a first warning shot, and the one of last week, which was the biggest such spike on record, exceeding even that seen in the 2008 crisis. The funding stresses in overnight repo markets were the culmination of a problem that has been simmering in the background for quite some time. It was partly the result of new banking regulations implemented 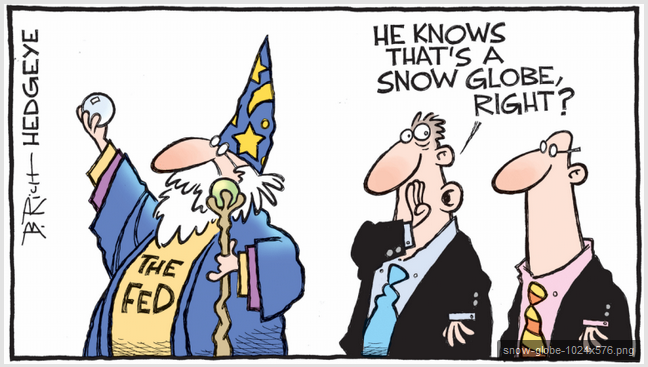 The Fed –  Groping in the Dark Again

Contrary to similar spikes in repo rates in 2008, it was probably not fear of counterparty risk that led to the recent repo quake.  What’s more, the Federal Reserve without a doubt knew that something like this was coming. We say this because even we knew it – it was not a secret. A number of analysts have warned of just such a situation for months.

It is true that the repo market indigestion is in a sense a “technical problem”, since the lender of last resort can create money and bank reserves in unlimited amounts at will – which it has indeed started to do in response. The Fed is now offering large repo operations to banks and dealers in order to bring rates back to  desired levels (note that inter alia the federal funds rate also moved briefly above the upper end of its target corridor during the repo quake).

And yet, it is astonishing that the Fed somehow seemed unprepared and quite surprised by the extent of the liquidity shortage. We would submit that this fact alone is a good reason for markets to be concerned. If the Fed is not even able to properly gauge such a “technical problem” in advance, what else is there it does not know?

That is a trick question – the answer is of course “plenty”. One thing it definitely does not know is what the “correct” market interest rate should be. Economists would be aghast if the government were to introduce price controls for other goods in the economy, but somehow they seem to think that bureaucrats should control the price of credit and the supply of money. It simply makes no sense, until you realize they have been bought off.

In an unhampered free market economy, rates would rise to the extent needed to draw sufficient liquidity to the market. Furthermore, the US Treasury would probably be forced to curtail its spending and borrowing. These things are not “allowed” to happen with a central economic planning agency administering interest rates and the money supply.

Conclusion – Lagged Effects of Tightening Are Beginning to Play Out

One thing the repo quake did reveal is that liquidity is much tighter than was previously assumed. We believe this means that the Fed is shortly going to resume “QE” in some shape or form (whether it will be called “QE” or something else is irrelevant – it will definitely grow its balance sheet again). According to some estimates $400 to $520 billion in net purchases are expected to be seen before the end of the year (this is to say, in addition to reinvestment of the proceeds from maturing MBS).

Furthermore, this probably also means that despite its protestations to the contrary, the Fed will continue to cut rates, as removing the yield curve inversion will restore carry trade demand for US treasuries. Recent economic data show that the US manufacturing sector – which accounts for more than 40% of the economy’s gross output – is in recession by now. This should provide the Fed with the fig leaf needed to justify additional rate cuts and securities purchases.

Superficially one may think that this is a positive development for “risk assets”, but it actually isn’t – at least not yet. We are merely at the beginning of the phase when the lagged effects of the massive slowdown in money supply growth are playing out. The fact that the Fed is “forced” to react to liquidity shortages and a rapidly cooling economy is actually a bad sign for stocks and corporate bonds. Keep in mind that whatever pumping measures it puts into place, their effect will also be subject to a sizable lag.

We plan to post an update on the money supply situation and recent ominous developments in the credit markets shortly.

Pater Tenebrarum is an independent analyst and economist/social theorist. He has been involved with financial markets in various capacities for 39 years and currently writes economic and market analyses for independent research organizations and a European hedge fund consultancy as well as being the main author of the acting-man blog.
My articlesMy siteAbout meMy books
Follow on:TwitterFacebookSeeking Alpha
Previous SNBCHF has changed sending service
Next ISM Spoils The Bond Rout!!!