Rising Probability For A Second Payroll Minus (and its implications)

by
Jeffrey P. Snider
My articles My booksMy videos
Follow on:Twitter
Summary:
Revolving consumer credit declined again in November 2020, according to data released by the Federal Reserve last week. Though the monthly seasonally-adjusted change was small, it still represents significant uncertainty and material mistrust of the underlying economic condition among a broad section of consumers. Those who are paying down their credit card balances, while avoiding taking on higher revolving debts, they are the very consumers Fed policymakers are counting on to lead any recovery rather than subvert it. In terms of non-revolving credit, the federal government continues to do what it does and will always do regardless of the circumstances. US Consumer Credit SA, Jan 2006 - 2020 - Click to enlarge Private banks and non-bank financial entities

Not for nothing, there were enormous “stimulus” checks written in 2020, too, along with huge doses of “money printing” and overt “market support” provided by the Federal Reserve (allegedly). When initially undertaken, it became quite widely believe how it would end up just that easy easing into the “V”-shaped recovery back to full again.

While it may be easy, you shouldn’t, as these millions of workers and business can’t, ignore that none of that happened the first time. Not even close, off by tens of millions. Markets, in particular, were imagining an end to 2020 that sure didn’t look anything like this.

Same thing 2021? Maybe not, vaccine and all, but it’s not an immaterial risk as the losses keep piling up long after they were supposed to have reversed (why haven’t yields, like the dollar, really moved all that much?) 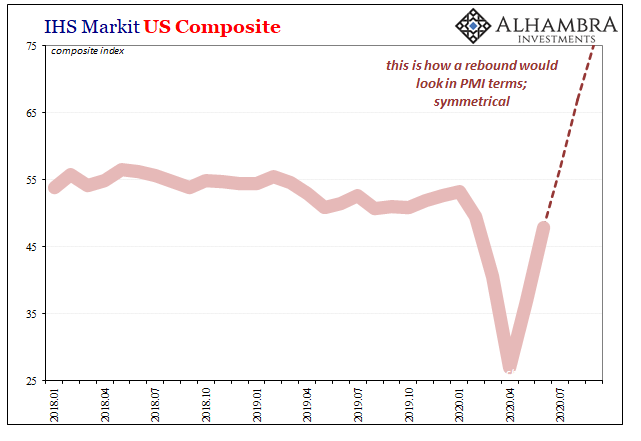 That’s Probably Why Only Half a “V”

Why only half a “V?” If the latest PMI’s are anywhere close to accurate, and they don’t have to be all that close, then the production side of the economy may have stalled out somewhere nearer the trough of this contraction. The promise of May’s big payroll report surprise has dissipated in more than just the bond market.

If the recession was the first “shoe to drop”, what’s the second…or third? The shock of the self-inflicted COVID recession is behind us. What we’re all wondering now is what comes next? Will the economy recover to its previous state? Something better? Something worse? That will be determined by the second and third-order effects and they are already starting.

A big splurge in September, and then not much more in October. While it would be consistent for many to focus on the former, instead there is much about the latter which, for once, is feeding growing concerns. Retail sales, American consumer spending on goods, has been the one (outside of economically insignificant housing) bright spot since summer 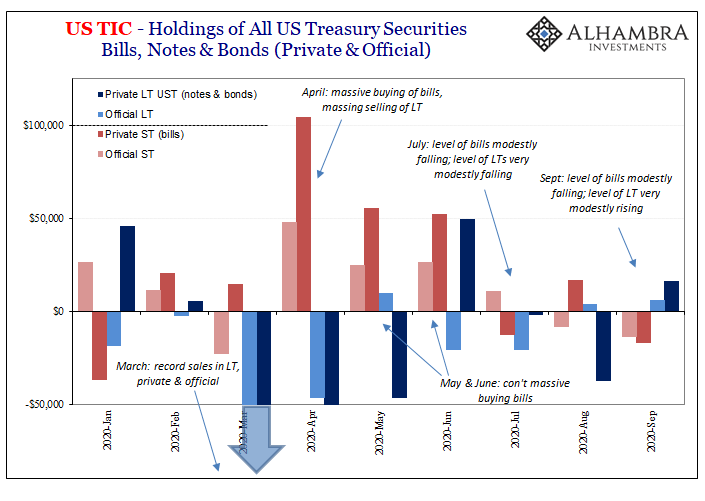 Are foreigners selling Treasury bills? If they are, this would seem to merit consideration for the reflation argument. After all, the paramount monetary deficiency exposed by March’s GFC2 (and the Fed’s blatant role in making it worse) was the dangerous degree of shortage over the best collateral.

The ISM’s Non-manufacturing PMI continued to decelerate from its high registered all the way back in July 2020. In that month, the headline index reached 58.1, the best since early 2019, and for many signaling that everything was coming up “V.”

Jeffrey P. Snider is the head of Global Investment Research of Alhambra Investment Partners (AIP). Jeffrey was 12 years at Atlantic Capital Management where he anticipated the financial crisis with critical research. His company is a global investment adviser, hence potential Swiss clients should not hesitate to contact AIP
My articlesMy books
Follow on:Twitter
Previous The Upside of Lockdowns: More Saving
Next Long Covid symptoms persist beyond 7 months, according to new data