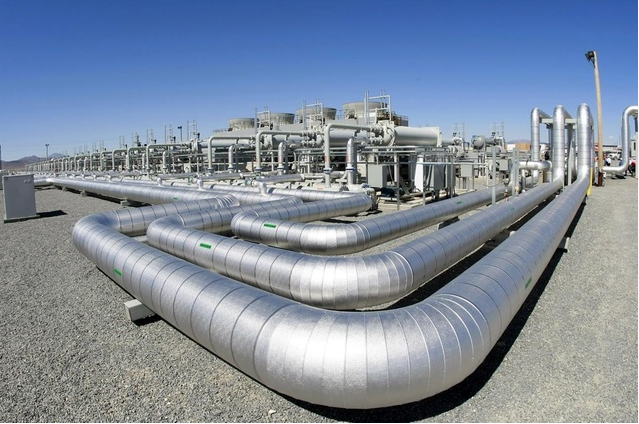 Injection of pressurised water underground creates a lot of pressure in the spaces between the rocks and is believed to be responsible for minor tremors. (Keystone / George Frey / Raser Technologies)

Identifying the kind of fault or tectonic forces in an underground reservoir can reduce the risk of tremors caused by geothermal energy or carbon storage.

The injection of cold pressurised water into hot impermeable rocks several kilometres underground is how underground reservoirs are created for geothermal energy. The super heated water is then pumped up and used to powers turbines in a geothermal plant. However, the process creates a lot of pressure in the spaces between the rocks and this horizontal stress is believed to be responsible for minor tremors.

Enhanced Geothermal Stimulation (EGS), as the technology is known, has faced setbacks in Switzerland after triggering earthquakes in Basel in 2006 and in St. Gallen in 2013. Scientists at the Swiss Federal Institute of Technology in Lausanne (EPFL) believe that faults or tectonic forces have an important role to play in such human-induced tremors.

According to the researchers, different types of faults require different approaches. For reverse faults – where two sections push against each other- they suggest injecting cold fluid underground for at least 12 months to cool the reservoirs and cause the rocks to contract.

For normal faults – where two sections pull away from each other – Enhanced Geothermal Stimulation can actually help stabilise the fault by increasing the horizontal stress. In such faults earthquakes are caused where there is a great difference between horizontal and vertical stresses.

“That’s why it’s so important to understand the properties of a reservoir before you start injecting,” says Fryer.

Their findings have been published in Geophysical Journal Internationalexternal link.

SWI swissinfo.ch – the international service of the Swiss Broadcasting Corporation (SBC). Since 1999, swissinfo.ch has fulfilled the federal government’s mandate to distribute information about Switzerland internationally, supplementing the online offerings of the radio and television stations of the SBC. Today, the international service is directed above all at an international audience interested in Switzerland, as well as at Swiss citizens living abroad.
My articlesMy books
Follow on:TwitterFacebookGoogle +
Previous US Treasury adds Swiss Franc back to its currency watch list – Bloomberg
Next FX Daily, January 14: China was a Currency Manipulator for a Few Months