by
Charles Hugh Smith
My articles My siteMy booksAbout me
Follow on:Twitter
Summary:
Our expectations have continued ever higher even as the pie is shrinking.. Let’s see if we can tie together four social dynamics: the elite college admissions scandal, the decline in social mobility, the rising sense of entitlement and the unrealistically ‘great expectations’ of many Americans. As many have noted, the nation’s financial and status rewards are increasingly flowing to the top 5%, what many call a winner-take-all or winner-take-most economy. This is the primary source of widening wealth and income inequality: wealth and income are disproportionately accruing to the top slice of earners and owners of productive capital. This concentration manifests in a broad-based decline in social mobility: it’s


Pater Tenebrarum writes In Gold We Trust, 2020 – The Dawning of a Golden Decade

Our expectations have continued ever higher even as the pie is shrinking..
Let’s see if we can tie together four social dynamics: the elite college admissions scandal, the decline in social mobility, the rising sense of entitlement and the unrealistically ‘great expectations’ of many Americans.
As many have noted, the nation’s financial and status rewards are increasingly flowing to the top 5%, what many call a winner-take-all or winner-take-most economy.
This is the primary source of widening wealth and income inequality: wealth and income are disproportionately accruing to the top slice of earners and owners of productive capital.
This concentration manifests in a broad-based decline in social mobility: it’s getting harder and harder to break into the narrow band (top 5%) who collects the lion’s share of the economy’s gains.
Historian Peter Turchin has identified the increasing burden of parasitic elites as one core cause of social and economic collapse. In Turchin’s reading, economies that can support a modest-sized class of parasitic elites buckle when the class of elites expecting a free pass to wealth and power expands faster than what the economy can support.
The same dynamic applies to productive elites: as I have often mentioned, graduating 1 millions STEM (science, technology, engineering, math) PhDs doesn’t magically guarantee 1 million jobs will be created for the graduates.
Such a costly and specialized education was once scarce, but now it’s relatively common, and this manifests in the tens of thousands of what I call academic ronin, i.e. PhDs without academic tenure or stable jobs in industry.
This glut is a global: I’ve known many people with PhDs from top universities in the developed world who have struggled to find a tenured professorship or a high-level research position anywhere in the world.
In other words, what was once a surefire ticket to status, security and superior pay is no longer surefire.
No wonder wealthy parents are so anxious to fast-track their non-superstar offspring by hook or by crook.
There is an even larger dynamic in play. As I explained here recently, the economic pie is shrinking, not just the pie of gains that can be distributed but the pie of opportunity.
Would parents and students be so anxious about their prospects if opportunities abounded for average students? The narrowing of opportunities to secure a stable career and livelihood is driving the frenzy to get into an elite university.
As everyone seeks an advantage, there’s a vast expansion of people with advanced diplomas: what was once relatively scarce (and thus valuable) is no longer scarce and therefore no longer very valuable.
The soaring cost of the middle-class membership basics–home ownership, healthcare and access to college–has drastically reduced the number of households who can afford these basics.
Two generations ago, just about any frugal working-class household with two wage-earners could save up a down payment for a modest home and later, save enough to put their children through the local state college.
Now, even two relatively well-paid wage earners in Left and Right Coast urban areas cannot afford to buy a house or put their kids through college. They are lucky to afford the rent, never mind buying a house.
As the number of upper-middle class slots declines, expectations have risen.This manifests in two ways: a rising sense of entitlement, which broadly speaking is the belief that the material security of middle class life should be available without great sacrifice.
The second manifestation is is higher expectations of material life in general:not only should we all have access to healthcare, college and home ownership, we also “deserve” to eat out every day, own luxury brand items, take resort vacations, and so on.
In a recent pre-recording conversation with a podcast host, we were talking about the number of average workers who think very little (apparently) of buying a $15 breakfast and/or a $20 lunch for themselves every day, plus an expensive coffee or beverage. This contrasts with the “old school” expectations which reserved lunches in restaurants for executives with expense accounts or The Boss. Everyone else filled a thermos with coffee at home and packed a brown bag lunch (or kau-kau tin in Hawaii).
From this perspective, $25 a day is $125 a week or $6,250 annually (a 50-week year). That’s $12,500 annually for a two wage-earner household. Five years of foregoing this luxury yields a nestegg of $62,500, a down payment for a $300,000 house, or the full cost of a four-year university education for two students who attend the local state university and who live at home.
(Sidebar note: a kind person gave us a $50 gift certificate to a popular casual-dining breakfast-lunch cafe. I reckoned we’d get a nice chunk of change after ordering two basic sandwiches and one beer. The $50 didn’t cover the three items, much less the tip. I nearly fell out of my chair. Over $50 for two sandwiches and a beer? And yet the place is jammed with people young amd old, and I wondered: is everyone here earning $200,000+ annually, i.e. a top 5% income? If not, how can they afford such a costly luxury?)
As I noted earlier this month in the blog, the Federal Reserve’s obsession with generating a “wealth effect” by inflating bubbles in stocks and housing have enriched owners of capital at the expense of the young.
My new book is The Adventures of the Consulting Philosopher: The Disappearance of Drake. For more, please visit the book's website. 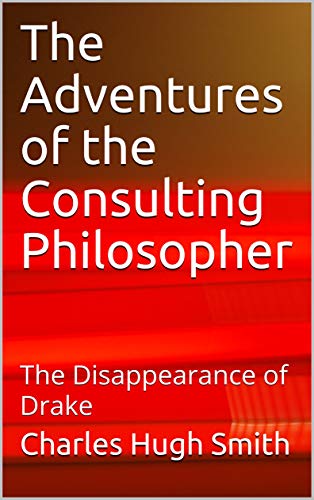 At readers' request, I've prepared a biography. I am not confident this is the right length or has the desired information; the whole project veers uncomfortably close to PR. On the other hand, who wants to read a boring bio? I am reminded of the "Peanuts" comic character Lucy, who once issued this terse biographical summary: "A man was born, he lived, he died." All undoubtedly true, but somewhat lacking in narrative.
My articlesMy siteMy booksAbout me
Follow on:Twitter
Previous Up to 100 Nestlé jobs in Basel at risk
Next A family apartment in Geneva close to twice the price of one in St. Gallen

Up to 100 Nestlé jobs in Basel at risk